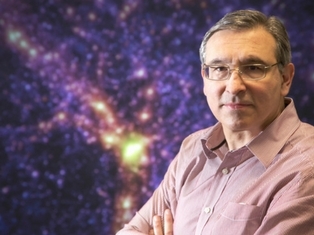 A world-leading Durham University space scientist has been honoured by The Queen for his work on the origins of the Universe and engaging the public in science.

Cosmologist Professor Carlos Frenk, Director of Durham University’s Institute for Computational Cosmology, was made a CBE (Commander of the Order of the British Empire) in The Queen’s Birthday Honours List.

The award to Professor Frenk, who was born in Mexico but holds dual Mexican-British citizenship, was made "for services to cosmology and the public dissemination of basic science".

Professor Frenk is one of the world’s foremost researchers behind the Cold Dark Matter theory for the formation of galaxies and the structure of the Universe.

Using high-powered supercomputers, Professor Frenk and his team carry out simulations of the cosmos which are compared with observations of the real Universe to test theories about its formation, structure and evolution.

The techniques developed by Professor Frenk and collaborators are now commonly used by cosmologists around the world to explain the formation of stars and galaxies.

A keen science communicator and contributor to many popular science programmes, such as BBC’s Horizon, Professor Frenk has also played a key role in establishing Durham University’s Ogden Centre for Fundamental Physics as a world leader in space science.

Research at the Ogden Centre forms the basis of a regional and national outreach programme undertaken by researchers to support public engagement in science in schools and the wider community.

Professor Frenk said: "It is a tremendous honour to be awarded a CBE by Her Majesty, The Queen. Scientific research is a collaborative enterprise and I view this honour as a recognition not just of the work that I have done, but also of the contribution of my many colleagues over the years, particularly my research students and postdoctoral assistants.

"I trained as a physicist in Mexico City but I have spent the best part of my career at Durham University researching the mysteries of our Universe. The ultimate goal is to figure out, using the laws of Physics, how our Universe evolves and, in particular, how, over 13.7 billion years of cosmic evolution, the Big Bang gave rise to the wonderful structures such as galaxies that today we see around us.

"In doing so, I have been privileged to collaborate with some very talented people to whom I owe an enormous debt of gratitude for their insights, hard work and inspiration."

Professor Frenk is also a Fellow of The Royal Society and in 2014 was awarded The Royal Astronomical Society’s highest honour, the Gold Medal for Astronomy, joining previous recipients such as Albert Einstein, Edwin Hubble and Charles Babbage.

Professor Stuart Corbridge, Vice-Chancellor of Durham University, said: "Carlos has helped to inspire generations of researchers and has played an important role in bringing science to the wider public.

"His energy, enthusiasm and talent have helped establish Durham as one of the world’s leading centres of research into fundamental physics and I am delighted to offer him my congratulations, and the congratulations of the University community, on this richly deserved honour."