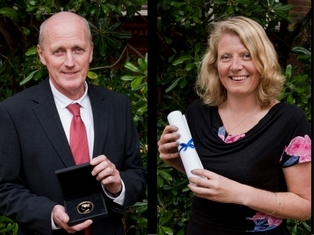 Two of Durham University’s geographers have been honoured for their outstanding achievements by the Royal Geographical Society (RGS).

Professor Harriet Bulkeley was awarded the Back Award for her contributions to the shaping of international policy on climate change and Professor David Evans was awarded the Busk Medal for excellence and originality in the study of glacial landscapes and empowering the next generation.

Professor Bulkeley’s research is focused on the way cities can respond to climate change, and her work has ensured that this important issue is now an integral part of the international climate policy agenda. In addition to her influential work with international agencies such as the World Bank and the United Nations, Professor Bulkeley has worked with the UK government. She served on the Social Science Advisory Group for the Department of Energy and Climate Change (DECC) and the Department of Environment, Food and Rural Affairs (Defra) from 2012 to 2016 advising on national energy, climate change and environmental policy development.

Professor Bulkeley said of her award:

“The award means a great deal to me. Having worked in the field of climate politics for twenty years, I know what a difficult challenge it can be. This award doesn’t just recognise my work but the fact that as a society we are capable of making progress on this issue.

“We have moved on from the belief that the only hope for addressing climate change was by getting all nation states to agree to common action. This is particularly pertinent now that President Trump has chosen to withdraw the United States from the Paris Climate Agreement. We now accept that cities and other non-state organisations such as private businesses and NGOs have the potential to take action to address climate change and it is crucial that we continue to build this momentum.”

Professor David Evans carries out research which aims to understand glacial geomorphology based on intensive fieldwork in a wide range of environments. He said:

“I have been extremely fortunate to have undertaken my career research in some of the world’s most impressive landscapes, especially the least accessible of those locations such as the Canadian Arctic, Svalbard, Iceland and South Georgia.”

He said of his award:

“It is always an honour to be acknowledged by your professional organisation, but for me the award of the Busk Medal by the RGS/IBG is extra special in that it recognises two things that form the foundation of all that I have attempted to do in my career. Firstly, to understand glacial geomorphology using modern analogues and thereby ensuring credibility by actually engaging with real glaciers; and secondly, by passing on our developing knowledge of glaciers and glaciation to younger generations through field research-led teaching.

“I would like to encourage all academics to contemplate taking student groups on research expeditions as I have done for the last 25 years, because it is the only way that field science can ensure a secure and productive future.”

Professors Bulkeley and Evans are both researchers in Durham’s Department of Geography which has been ranked in the top 10 in the world in the QS World University Rankings by Subject (2017) for five consecutive years.

The RGS awards were presented as part of the Royal Geographical Society (with the Institute of British Geographers) Annual General Meeting in London on 5th June 2017.