A supervoid is unlikely to explain a 'Cold Spot' in the cosmic microwave background, according to new research led by Postgraduate Student Ruari Mackenzie and Professor Tom Shanks of the Centre for Extragalactic Astronomy at Durham University. Their results, published in the Monthly Notices of the Royal Astronomical Society, have attracted attention in the national press as they leave room for more exotic explanations, such as a collision between universes and the potential for this Cold Spot to be ‘the first evidence for the multiverse – and billions of other universes that may exist like our own.’

The cosmic microwave background (CMB), a relic of the Big Bang, covers the whole sky. At a temperature of 2.73 degrees above absolute zero (or -270.43 degrees Celsius), the CMB has some anomalies, including the Cold Spot.

This feature, about 0.00015 degrees colder than its surroundings, was previously claimed to be caused by a huge void, billions of light years across, containing relatively few galaxies.

In their new work, the Durham team presented the results of a comprehensive survey of 7,000 galaxies – and found no evidence of a ‘supervoid’.

Mackenzie commented: "The voids we have detected cannot explain the Cold Spot under standard cosmology. There is the possibility that some non-standard model could be proposed to link the two in the future but our data place powerful constraints on any attempt to do that."

If there really is no supervoid that can explain the Cold Spot, simulations of the standard model of the universe give odds of 1 in 50 that the Cold Spot arose by chance.

Tom Shanks said: ‘This means we can’t entirely rule out that the Spot is caused by an unlikely fluctuation explained by the standard model. But if that isn’t the answer, then there are more exotic explanations.'

‘Perhaps the most exciting of these is that the Cold Spot was caused by a collision between our universe and another bubble universe.

‘If further, more detailed, analysis of CMB data proves this to be the case then the Cold Spot might be taken as the first evidence for the multiverse – and billions of other universes may exist like our own.’

For the moment, all that can be said is that the lack of a supervoid to explain the Cold Spot has tilted the balance towards these more unusual explanations, ideas that will need to be further tested by more detailed observations of the CMB. 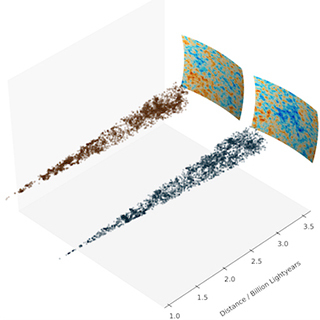 The 3-D galaxy distribution in the foreground of the CMB Cold Spot, where each point is a galaxy.