A Solar Eruption in 5 Steps

Large and small scale solar eruptions might all be triggered by a single process, according to new research that leads to better understanding of the Sun’s activity.

Researchers at Durham University and NASA’s Goddard Space Flight Center, USA, used 3D computer simulations to show a theoretical link between large and small scale eruptions that were previously thought to be driven by different processes.

They looked at the mechanism behind coronal jets - relatively small bursts of plasma (hot gas) from the Sun – and much larger-scale coronal mass ejections (CMEs), where giant clouds of plasma and magnetic field are blown into space at high speed.

Both types of eruptions were known to involve snake-like filaments of dense plasma low in the Sun’s atmosphere, but until now how they erupted at such vastly different scales was unclear.

The researchers discovered that the filaments in jets are triggered to erupt when the magnetic field lines above them break and rejoin - a process known as magnetic reconnection.

The same process was previously known to explain many CMEs.

The strength and structure of the magnetic field around the filament determines the type of eruption that occurs, the researchers said.

Their findings are published in the journal Nature.

Understanding solar eruptions is important as their electromagnetic radiation can disrupt radio transmissions and satellite communications, and they can eject high-energy electrically charged particles that can potentially endanger astronauts.

CMEs also help create the spectacular light shows, or aurorae, at both of the Earth’s magnetic poles, as charged particles accelerated by the CME collide with gases such as oxygen and nitrogen in Earth’s atmosphere.

The new study provides theoretical support for previous observational research which suggested that coronal jets are caused in the same way as CMEs.

The Durham-led researchers said their latest findings covered all solar eruptions from the largest CMEs to the smallest coronal jets.

Lead author Dr Peter Wyper, Royal Astronomical Society Fellow, in the Department of Mathematical Sciences, Durham University, said: “It was previously thought that there were different drivers for the varying scales of eruptions from the Sun, but our research provides a theoretical universal model for this activity, which is very exciting.

“A greater understanding of solar eruptions at all scales could ultimately help in better predicting the Sun’s activity.

“Large-scale coronal mass ejections, where huge amounts of solar plasma, radiation and high energy particles are being released, can influence the space around them, including the space near to Earth.

“They can interfere with satellite communications, for example, so it is beneficial for us to be able to understand and monitor this activity.”

The research was funded by the Royal Astronomical Society and NASA. The computer simulations were carried out at NASA’s Center for Climate Simulation.

The scientists call their proposed mechanism for how filaments lead to eruptions the breakout model, because of the way the stressed filament pushes relentlessly at – and ultimately breaks through – its magnetic restraints into space.

“Within a unified context, we can advance understanding of how these eruptions are started, how to predict them, and how to better understand their consequences.”

In future, the researchers plan to use further simulations to test their model for solar eruptions in different magnetic configurations, and to study how the swarms of high energy particles, which can affect satellites and astronauts, are launched into space by these events.

Confirming the theoretical mechanism will require high-resolution observations of the magnetic field and plasma flows in the solar atmosphere, especially around the Sun’s poles where many jets originate — data that is currently not available.

For now, scientists are looking to upcoming missions such as NASA’s Solar Probe Plus and the joint European Space Agency/NASA Solar Orbiter, which will acquire novel measurements of the Sun’s atmosphere and magnetic fields emanating from solar eruptions. 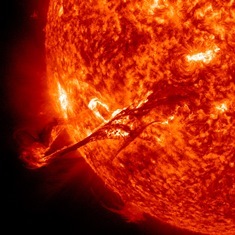