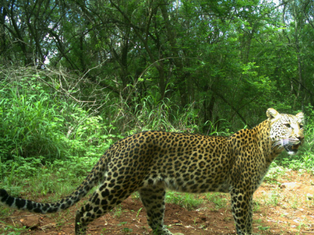 Leopard populations in part of South Africa are decreasing in greater numbers and at a greater speed than expected, due in large part to illegal killing by humans according to new findings.

A research team led by Dr Samual Williams, an Honorary Research Fellow in the Department of Anthropology, conducted a long-term study of the leopard population in the Soutpansberg Mountains in South Africa and found that leopard density (the number of leopards per 100 km2) had decreased by 44% between 2012 and 2016 and by 66% since 2008.

The project aims to understand more about the threats faced by leopards and the research team hopes that their findings, which have been published in the academic journal Royal Society Open Science, will help inform conservation efforts.

Dr Williams explained the significance of the decrease they found in leopard population density: “If the current rate of decline is not slowed down then there will be no leopards left in the western Soutpansberg Mountains by 2020.

“This is especially alarming considering that in 2008 this area had one of the highest leopard population densities in Africa.”

To track leopard numbers the team set up 23 camera stations across their study area. The cameras ran continuously from January 2012 until February 2016, collecting hundreds of photos of leopards. You can see some of the remarkable photos of leopards gathered by the research team in an online photo gallery.

The team were able to identify individual leopards in each photo by their unique coat markings, allowing the researchers to build up the most detailed picture to date of leopard numbers in the area.

Eight adult leopards were also fitted with GPS collars, enabling researchers to track their movements for over a year to help understand why leopard numbers were declining.

Six of the eight leopards fitted with a tracking collar died during the period they were being monitored.

Investigating the causes of death for the leopards, the team found that illegal killing of animals by humans, mainly in response to a perceived threat from leopards to livestock, was a leading cause.

Dr Williams explained: “Illegal human activities like shooting, snaring and poisoning were the leading cause of death in the leopards we tracked.

“This was often in response to a perception that leopards were a threat to livestock.

“Clearly there is a need for conservation efforts to address these illegal killings. Educating communities and supporting them to adopt non-lethal techniques to help protect their livestock is essential.

The research team worked with a Community Engagement Officer to help educate local communities about how to protect their live-stock from the threat of leopards, and other carnivores, without taking lethal action.

This can include building stronger fences and enclosures to keep leopards out and even keeping a guard dog within livestock enclosures to ward off predators.

Education for communities on the importance of leopards to the local ecosystem, including the role they play in keeping other predators under control, has also formed an important part of this work.

The team also argue that trophy hunting of leopards, which is subject to a temporary ban in South Africa whilst more data on leopard numbers is collected, should not be allowed to resume in areas such as the Soutpansberg Mountains, where numbers are in steep decline.

Dr Williams said: “In areas such as this trophy hunting is a luxury that cannot be afforded.

“Large carnivores like leopards are hugely important to the ecosystem of an area and also carry significant economic and cultural importance.

“Their loss would impoverish both the ecology of the area and human culture so it is vital that we understand the threats leopards face and act on this.”

The research was carried out by the Primate and Predator Project based at the Anthropology Field Station in the Soutpansberg Mountains, South Africa.

This is a wildlife research project led by Professor Russell Hill of the Department of Anthropology in conjunction with the Earthwatch Institute.

You can learn more about thisr research work through the dedicated web pages.