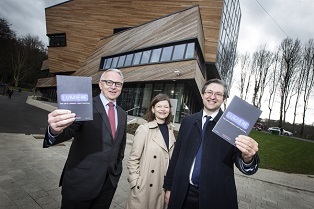 Lumiere’s relationship with Durham University received a boost today with the announcement that the University is to be a major sponsor in this year’s light festival, which will return to Durham 16 -19 November 2017.

Artichoke, the arts charity that creates and produces Lumiere, festival commissioners Durham County Council, and Durham University, have agreed a deal that will formalise the University’s partnership for the fifth edition of Lumiere Durham. In 2017, the University will be a major sponsor in Lumiere Durham for the first time, through a cash investment of £100,000 and as a significant delivery partner in the areas of investment, research, education, staff capacity and expertise, and cultural activity.

Durham University has been supportive of Lumiere since it began in 2009. In 2013, two major installations, Solar Eclipse by Rafael Lozano Hemmer and Gina Czarnecki’s exploration of the eye, “I”, were sited at Lower Mountjoy and supported by a series of talks by University staff.

In 2015, research images and expertise from the Institute for Computational Cosmology were incorporated into The World Machine, Ross Ashton’s son et lumiere projected onto Durham Cathedral. This involved the work of University students and staff, including Professor Carlos Frenk and Professor Richard Bower.

“We are proud of the positive contribution Durham University makes to North East England and the UK in a number of ways – economically, socially and culturally.

“Working in partnership with Durham County Council as well as Artichoke on Lumiere provides us with the opportunity to do so much more to benefit local communities, as well as attracting extra visitors to Durham, further boosting the region’s economy.

“The University has had successful involvement in Lumiere since it began in 2009 and we are very pleased to be continuing this as a major sponsor for Lumiere Durham 2017.”

Simon Henig, Leader of Durham County Council said: “We are delighted to be welcoming back Lumiere for another year and we are grateful to Durham University for their financial support for this special event.

Lumiere is not just special because it lights up our buildings, it also lights up the lives of many who live in our county, or who make a special journey to the festival, which is now the UK’s largest light festival. In return, Lumiere brings in £9.6 million to the local economy and puts this county on the map as a cultural centre, something that helps draw businesses, investors, residents and students alike to Durham – many of whom are now proud to call this county home.”

“This is a historic new step for Artichoke’s partnership with Durham University. Since 2009, we have worked together successfully on a number of projects at each festival with some wonderful results and I’m delighted that the University will be a major sponsor for Lumiere Durham 2017”.