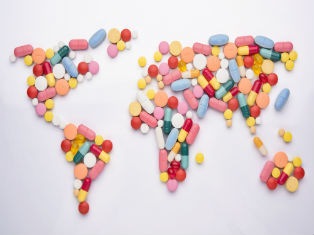 An effective treatment for a deadly strain of meningitis could become more readily available in less developed nations as a result of research led by Professor Graham Sandford of the Department of Chemistry.

Cryptococcal Meningitis (CM) is the leading cause of meningitis in Saharan Africa and also accounts for 20% of HIV/AIDs deaths worldwide.

Whilst in developed nations around 9% of those diagnosed with CM die, this figure rises to 70% in sub-Saharan Africa where availability of suitable drug treatment is limited, due in part to cost.

Now research by Professor Sandford and Ph.D. student Antal Harsanyi has resulted in an innovative, simplified method of producing the vital drug flucytosine, which could significantly reduce cost.

The World Health Organisation (WHO) recommends that CM be treated with a combination of drugs including flucytosine.

Flucytosine is included in the WHO Essential Medicines list, which details the minimum drugs the organisation considers necessary for basic health care systems.

However, current production of flucytosine involves a complex process of four separate chemical reactions. This multi-stage process, and the lack of a generic alternative to flucytosine, makes the drug prohibitively expensive for many less developed nations, with a 2-week treatment estimated to cost $62 per patient.

The new process developed by Professor Sandford and Antal Harsanyi involves just one chemical reaction, making it significantly simpler than the current four-step production method, raising the possibility that this vital drug could be made available at a greatly reduced cost in future.

Professor Sandford explains: “We have successfully developed a method of making flucytosine from a starting material of cytosine which is a readily available, naturally occurring product.

“Our new technique continuously passes fluorine gas through a reactor tube, together with a solution of cytosine in acid. In the tube the fluorine atoms react with the cytosine molecules to make flucytosine.

The Durham University team worked with the pharmaceutical company Sanofi and MEPI, a French non-profit association, to look at whether the new production process could be scaled-up to meet the levels that would be necessary for commercial production of the medication.

Initial work showed that a small scale reactor was capable of producing 1kg of raw material a day, indicating that this new process could provide a viable alternative method for larger-scale production of flucytosine.

The next stage of this work is to look at production-level scale-up. The hope is that the greatly simplified production process will result in a far cheaper overall cost for the medication, helping to make it available to those who need it most.

Professor Sandford said: “Our research has shown that it is possible to synthesise flucytosine using an operationally simple process and inexpensive, readily available starting materials.

“Our hope is that this research will raise awareness of the neglected CM health epidemic and help to provide affordable flucytosine for low income countries, something which is urgently needed.”

The research was published in the American Chemical Society’s Organic Process Research & Development journal and is available to read in full online. The research was undertaken as part of the CHEM21 project, funded by the Innovative Medicines Initiative (IMI), which brings together European Union pharmaceutical industries and academics to develop sustainable pharmaceutical manufacturing processes.