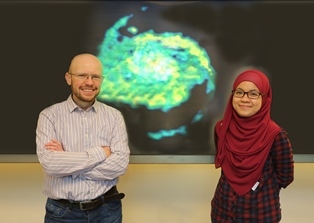 Monster black holes sometimes play a cosmic game of hide and seek, shrouding themselves from view behind giant clouds of gas and dust, according to new research.

Scientists believe supermassive black holes lurk at the centres of most big galaxies, but many are hidden from the view of most telescopes.

Now astronomers at Durham and Southampton universities, working with NASA’s Jet Propulsion Laboratory (JPL), have confirmed in separate studies that two of these cosmic giants had been hidden by thick layers of gas and dust at the heart of galaxies near to our own Milky Way.

The research could provide more information about supermassive black holes, allowing them to be studied in more detail.

The findings were presented jointly at the American Astronomical Society meeting in Grapevine, Texas.

Ady Annuar, a postgraduate researcher in Durham’s Department of Physics, led a study looking at the black hole at the centre of the NGC 1448 spiral galaxy.

NGC 1448 is one of the nearest large galaxies to our Milky Way at 38 million light years away (one light year is about six trillion miles).

The study found that the galaxy had a thick column of gas at the nucleus, hiding the central black hole that was only discovered in 2009.

X-ray emissions as seen by NuSTAR and the Chandra X-ray Observatory suggest for the first time that there must be a thick layer of gas and dust shielding the active black hole in the galaxy from view.

Ady, who is also a member of Durham University’s Centre for Extragalactic Astronomy, said: "These black holes are relatively close to the Milky Way, but they have remained hidden from us until now.

“Their recent discoveries certainly call out the question of how many other supermassive black holes we are still missing, even in our nearby Universe.”

Research co-author Professor David Alexander, in Durham’s Department of Physics, added: “These hidden monsters have been predicted to be fairly abundant in our Universe.

“It is only after the advent of NuSTAR that we actually began to find each of them one by one.”

The Durham-led study also found that NGC 1448 has a large population of young (five-million-year-old) stars, suggesting that the galaxy produces new stars at the same time that its black hole feeds on gas and dust.

In a similar study, researchers led by the University of Southampton, looked at an active galaxy called IC 3639, which is 170 million light years away.

Researchers analysed data from this object alongside previous observations from Chandra and the Japanese-led Suzaku satellite.

As with the NGC 1448 galaxy, they confirmed the nature of IC 3639 as an active galactic nucleus – a class of extremely bright objects that includes quasars and blazars.

NuSTAR also provided the first precise measurement of how much material is obscuring the central engine of IC 3639, allowing researchers to determine how luminous this hidden monster really is.

NuSTAR is a Small Explorer mission led by Caltech and managed by JPL for NASA's Science Mission Directorate in Washington. NuSTAR was developed in partnership with the Danish Technical University and the Italian Space Agency (ASI). The spacecraft was built by Orbital Sciences Corp., Dulles, Virginia. NuSTAR's mission operations center is at UC Berkeley, and the official data archive is at NASA's High Energy Astrophysics Science Archive Research Center. ASI provides the mission's ground station and a mirror archive. JPL is managed by Caltech for NASA.

Daniel Stern, project scientist for NuSTAR, at NASA’s Jet Propulsion Laboratory, said: "It is exciting to use the power of NuSTAR to get important, unique information on these beasts, even in our cosmic backyard where they can be studied in detail.”

The Durham University study was funded by Majlis Amanah Rakyat (MARA) Malaysia and the Science and Technology Facilities Council.