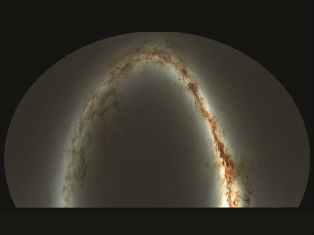 Cosmologists at Durham University have helped put together the world’s largest digital survey of the visible Universe.

The Pan-STARRS1 Surveys, which have mapped billions of stars and galaxies, have been publicly released, with scientists predicting this will lead to new discoveries about the Universe.

The data has been made available by the international Pan-STARRS project.

Astronomers and cosmologists, including scientists at Durham University, used a 1.8-metre telescope at the summit of Haleakalā, on Maui, Hawaii, to repeatedly image three quarters of the visible sky over four years.

The data they have captured in the Pan-STARRS1 Surveys is made up of three billion separate sources, including stars, galaxies, and other space objects.

This immense collection of information contains two petabytes of computer data – equivalent to one billion selfies or one hundred times the total content of Wikipedia.

Pan-STARRS is hosted by the University of Hawaii Institute for Astronomy, which is releasing the data alongside the Space Telescope Science Institute in Baltimore, USA.

The international collaboration also includes the Universities of Durham, Edinburgh and Queen’s University Belfast and is supported by NASA and the National Science Foundation. Durham’s contribution was funded by a generous donation from The Ogden Trust and Durham University.

“Pan-STARRS was new concept and presented many challenges along the way, but finally we are ready to release this unique survey to astronomers everywhere.

“It will impact upon nearly all branches of astronomy, from solar system studies, out through our own galaxy and into the distant Universe.”

In May 2010, the Panoramic Survey Telescope & Rapid Response System, or Pan-STARRS, observatory embarked on a digital survey of the sky in visible and near infrared light.

This was the first survey with a goal of observing the sky very rapidly over and over again, looking for moving objects and transient or variable objects, including asteroids that could potentially threaten the Earth.

Professor Carlos Frenk, Director of the Institute for Computational Cosmology, said: "The Pan-STARRS telescope was ahead of its time and produced the largest and most detailed survey of the Universe around us.

“By making this huge dataset available to all astronomers around the world new discoveries are inevitable. Whether they will inform us about potentially hazardous asteroids or about the origin of galaxies remains to be seen."

Dr Ken Chambers, Director of the Pan-STARRS Observatories, at the University of Hawaii, said: “The Pan-STARRS1 Surveys allow anyone to access millions of images and use the database and catalogues containing precision measurements of billions of stars and galaxies.

"Pan-STARRS has already made discoveries from Near Earth Objects and Kuiper Belt Objects in the Solar System to lonely planets between the stars; it has mapped the dust in three dimensions in our galaxy and found new streams of stars; and it has found new kinds of exploding stars and distant quasars in the early Universe.”

The roll-out of the survey data is being done in two steps.

The first is the “Static Sky” which provides an average value for the position, brightness and colour for objects captured in the sky at individual moments in time.

In 2017, a second set of data will be released including catalogues and images from each of the individual snapshots that Pan-STARRS took of a given region of sky.

* Image shows the Pan-STARRS Sky Survey. This compressed view of the entire sky visible from Hawai'i by the Pan-STARRS1 Observatory is the result of half a million exposures, each about 45 seconds in length, taken over a period of 4 years. The shape comes from making a map of the celestial sphere, like a map of the Earth, but leaving out the southern quarter. The disk of the Milky Way looks like a yellow arc, and the dust lanes show up as reddish brown filaments. The background is made up of billions of faint stars and galaxies. If printed at full resolution, the image would be 1.5 miles long, and you would have to get close and squint to see the detail.