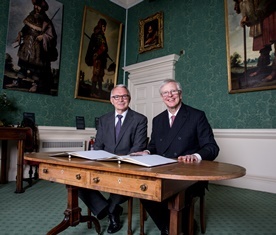 Durham University is helping to establish a corner of North East England as an international centre for research into Spanish and Latin American art and culture.

The University and Auckland Castle Trust have entered into a new partnership to create The Zurbarán Centre for Spanish and Latin American Art in Bishop Auckland, County Durham.

The centre will link Durham’s academic research to the curatorial programme at Auckland Castle’s Spanish Gallery and support public engagement and regional regeneration.

Together, the research centre and gallery provide a direct link between research and exhibition programming, creating student opportunities and allowing visitors to benefit from world-class research.

Postgraduate students will work alongside Auckland Castle’s curatorial staff, ensuring that the next generation of curators and museum professionals benefit from a hands-on experience of an evolving collection.

It is envisaged that the centre, which will also host major conferences and workshops, will raise the public profile and understanding of Spanish and Latin American art, both in the UK and globally.

Durham University will begin an international search to recruit a director for the new centre in autumn 2016.

A formal partnership agreement was signed by Professor Stuart Corbridge, Vice-Chancellor of Durham University, and Jonathan Ruffer, Chairman of Auckland Castle Trust, at a private event at Auckland Castle.

Professor Corbridge and Ana Botín, Santander Group’s Executive Chairman, also signed a gift agreement which will see Santander donate £600,000 over a three year period to Durham University to help fund the centre - the largest single donation made by Santander to a UK university.

The centre will also receive an additional £1m investment from Durham University over the next five years.

The project forms part of a wider £70m investment by Auckland Castle Trust designed to stimulate economic regeneration in Bishop Auckland, by creating an art, faith and heritage destination of international significance.

It is hoped that the new partnership will make a significant contribution to the region’s economy by attracting tourists and visiting scholars from around the world, in turn boosting employment and local business.

County Durham is home to the UK’s largest collection of Spanish art outside of London, including the paintings of Jacob and his Twelve Sons by Spanish master Francisco de Zurbarán, which are currently housed at Auckland Castle.

The new Zurbarán Centre for Spanish and Latin American Art, named in honour of this series, will be run by Durham University and is due to open in 2017.

It will be complemented by the separate Spanish Gallery, due to be opened by Auckland Castle Trust in 2019, which will explore Spanish art from the medieval period to the present day, focusing particularly on the Golden Age of art in the seventeenth century. It will also draw on works from the Trust’s extensive collection and on loan from partners around the world.

Professor Stuart Corbridge, Vice-Chancellor of Durham University, said: “Durham University is ranked in the world top 50 for Arts and Humanities and is also establishing itself as a leading international centre for the study of visual culture.

“This new research centre and partnership with Auckland Castle, with its access to extensive collections of Spanish art, allows us to further enhance this work.

“Not only will it offer our students the chance to study some of the world’s most important artworks, it is also a way of connecting the wider public with our research expertise and is a commitment to the cultural regeneration of Bishop Auckland.”

Jonathan Ruffer, Chair of Trustees at Auckland Castle, said: “County Durham and the wider North East is primed for this kind of support and investment.

“The Zurbarán Centre for Spanish and Latin American Art and Spanish Gallery are both a key part of our plans to draw more international visitors to the region and to stimulate economic regeneration both in Bishop Auckland and further afield.

“We are proud to be working in partnership with Durham University and Santander on a project of such international significance and look forward to also elevating the profile of Spanish and Latin American Art both in the UK and around the world.”

Ana Botín, Santander Group Executive Chairman, said: “The work being done by Durham University and Auckland Castle Trust will help to develop a world class centre for sharing and understanding Spain’s art and culture. Santander has strong connections to County Durham through both our customers and people so we are delighted to support this outstanding partnership.”

The new centre will complement the work of Durham University’s Centre for Visual Arts and Culture, as well as its highly regarded Department of Hispanic Studies, within the School of Modern Languages and Cultures, and additional work in Spanish and Latin American art across a number of other departments.