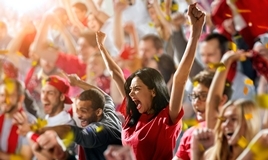 As England celebrates the 50th anniversary of winning the World Cup, Dr Stacey Pope from the School of Applied Social Sciences discusses the impact this iconic moment in football history had on female fans.

What did the World Cup of 1966 mean to female fans in England at the time?

Although the 1966 World Cup has had a huge impact on contemporary English culture, in general female fans have been largely ignored in historical research. My research has looked at female fans’ memories and interpretations of this historic event.

In terms of impact, the fact that the tournament was held in England played a key role in the significance attached to it by women living in this country. The number of homes owning a television set had increased in the 1960s and as the tournament was televised live, it was accessible in a way that the football stadium had not been to many women. For some female fans this was the first time they had encountered football and many remembered watching games with their families at home.

On the other hand, some women were unable to watch this event at all due to traditional gender roles. In some cases, football was perceived as an unsuitable sport for women to watch (or play) at this time. Some of the women I spoke to, felt that as children they had been conditioned by their parents, teachers and peers into thinking that watching and playing football was unsuitable for girls and this had consequently deterred them from developing an interest in the sport. Other women found they were unable to watch the World Cup victory due to childcare responsibilities, which did not prohibit their husbands or male partners in the same way.

You have spent the last 10 years working with female football fans from the UK - why did you decide to carry out research in this area?

The main rationale for my research on female football and rugby union fans has been the dearth of existing research in the area of female sports fandom. Most academic research to date has primarily focused on men as sports fans, and particularly on hooliganism and issues of fan rivalry. Existing research on sports fans has also tended to focus on fans of one sport, and so lacks the comparative focus I have advocated in my work.

What changes have you seen for female fans since the 1966 World Cup?

I believe there has actually been a feminization of sports fandom, with increased opportunities for women to become involved in sport as fans today. This can be attributed to two key factors.

Firstly, major transformations have occurred in women’s lives in the areas of work, education and within the family. For example there are now less segregated gender roles and the size of families have reduced with access to birth control. This has led to more equality and more opportunities for women to become involved in sport as fans.

Secondly, the improvements to professional sport venues have created a safer and arguably, a more welcoming environment for women. The move to all-seater stadia in English football following changes implemented after the Hillsborough Stadium disaster of 1989 and improvements in stadia and facilities after rugby union professionalised in 1995 all played a part. The increased media and social media coverage around these sports has introduced them to some new female (and male) fans. Of course, some women have been attending these sports throughout their histories.

In what way are female fans perceived differently from male fans?

Female sports fans are often treated as “inauthentic” in popular and academic accounts, and are assumed to lack sporting knowledge with their interest being reduced to a (hetero) sexual interest in players. But my findings show that many female fans are highly committed and knowledgeable fans and sport clearly plays an important part in their lives and identities.

It is important to look at the range of women’s experiences and the diversity of female fan attachments to sport and move away from gender hierarchies which assume that men are ‘authentic’ or ‘real’ supporters and women are ‘inauthentic’ or inferior.