Seeds of supermassive black holes could be revealed by gravitational waves

Searching for the seeds of supermassive black holes

Gravitational waves captured by space-based detectors could help identify the origins of supermassive black holes, according to new computer simulations of the Universe.

Scientists led by Durham University’s Institute for Computational Cosmology ran the huge cosmological simulations that can be used to predict the rate at which gravitational waves caused by collisions between the monster black holes might be detected.

The amplitude and frequency of these waves could reveal the initial mass of the seeds from which the first black holes grew since they were formed 13 billion years ago and provide further clues about what caused them and where they formed, the researchers said.

The research is being presented at the Royal Astronomical Society’s National Astronomy Meeting in Nottingham, UK. It was funded by the Science and Technology Facilities Council, the European Research Council and the Belgian Interuniversity Attraction Poles Programme.

The study combined simulations from the EAGLE project – which aims to create a realistic simulation of the known Universe inside a computer – with a model to calculate gravitational wave signals.

Two detections of gravitational waves caused by collisions between supermassive black holes should be possible each year using space-based instruments such as the Evolved Laser Interferometer Space Antenna (eLISA) detector that is due to launch in 2034, the researchers said.

In February the international LIGO and Virgo collaborations announced that they had detected gravitational waves for the first time using ground-based instruments and in June reported a second detection.

As eLISA will be in space – and will be at least 250,000 times larger than detectors on Earth – it should be able to detect the much lower frequency gravitational waves caused by collisions between supermassive black holes that are up to a million times the mass of our sun.

Current theories suggest that the seeds of these black holes were the result of either the growth and collapse of the first generation of stars in the Universe; collisions between stars in dense stellar clusters; or the direct collapse of extremely massive stars in the early Universe.

As each of these theories predicts different initial masses for the seeds of supermassive black hole seeds, the collisions would produce different gravitational wave signals.

This means that the potential detections by eLISA could help pinpoint the mechanism that helped create supermassive black holes and when in the history of the Universe they formed.

“These waves are caused by massive collisions between objects with a mass far greater than our sun.

“By combining the detection of gravitational waves with simulations we could ultimately work out when and how the first seeds of supermassive black holes formed.”

Co- author Professor Richard Bower, of Durham University’s Institute for Computational Cosmology, added: “Black holes are fundamental to galaxy formation and are thought to sit at the centre of most galaxies, including our very own Milky Way.

“Discovering how they came to be where they are is one of the unsolved problems of cosmology and astronomy.

“Our research has shown how space based detectors will provide new insights into the nature of supermassive black holes.”

Gravitational waves were first predicted 100 years ago by Albert Einstein as part of his Theory of General Relativity.

The waves are concentric ripples caused by violent events in the Universe that squeeze and stretch the fabric of space time but most are so weak they cannot be detected.

eLISA will work in a similar way, detecting the small changes in distances between three satellites that will orbit the sun in a triangular pattern connected by beams from lasers in each satellite.

In June it was reported that the LISA Pathfinder, the forerunner to eLISA, had successfully demonstrated the technology that opens the door to the development of a large space observatory capable of detecting gravitational waves in space.

* Durham's researchers will show how they use supercomputer simulations to test how galactic ingredients and violent events combine to shape the life history of galaxies when they exhibit at the Royal Society Summer Science Exhibition in London from 4 to 10 July, 2016. 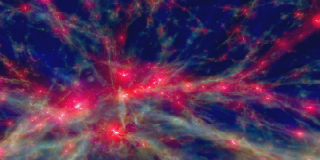