One year on - helping Nepal to recover from devastating earthquakes 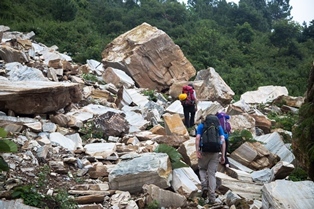 The earthquakes that struck Nepal in 2015 were a social, economic and cultural catastrophe. In the face of such devastation, relief and recovery become a global concern.

Over the last year Durham University has been working with a number of partners in Nepal and internationally on projects to inform relief efforts, understand ongoing risks, assist recovery and build future resilience.

A team of researchers at the University’s Institute of Hazard, Risk and Resilience (IHRR) and Department of Geography have focused their expertise on Nepal over the last twelve months.

Working with partners at Nepal’s National Society for Earthquake Technology (NSET), the Overseas Development Institute (ODI) and the British Geological Survey (BGS) the team will also examine the potential for future engagement between the science-policy-practice communities.

This work forms part of the Earthquakes Without Frontiers (EwF) project, of which Durham University is a key partner. The EwF project aims to increase resilience to earthquakes in the countries across the India-Asia collision.

Dr Tom Robinson is looking at how scenario-planning and probability mapping can be used to build better resilience to earthquakes and reduce the losses, both in terms of infrastructure and fatalities, which result from them. Working with partners including the United Nations, the aim is that Tom’s work will help inform earthquake risk management going forward.

These projects build on the substantial work undertaken by IHRR members over the past year.

Immediately after the earthquake Dr Nick Rosser and his team worked with UK and international partners to map earthquake-triggered landslides. The resulting maps have been used to help guide aid and relief efforts on the ground.

Dr Rosser has also worked with NSET and BGS on a project funded by the UK Natural Environment Research Council, to install monitoring equipment to measure the stability of cracks that opened up in mountain-sides following the earthquake. You can read more about both projects here.

In the aftermath of the earthquake Professor Lena Dominelli worked in conjunction with the Nepalese School of Social Work (NSSW) to support social workers on the ground involved in humanitarian relief efforts.

This support has been sustained by working with severely affected rural communities to redevelop, rebuild and grow resilience.

The IHRR is also working with NSSW to support social work students to record the experiences of these villages post-earthquake to understand how best to ensure community resilience to future earthquakes and natural hazards.

Dr Ben Campbell has also been supporting rural communities in his work to secure renewable energy sources to ensure resilience.

“The work being undertaken in Nepal shows the vital role that academic research can have in helping recover from and build resilience to natural disasters. In every project there is a real commitment to helping Nepal, and other countries facing similar hazards, to build future resilience and further their understanding of earthquake risks.”

The earthquakes caused significant damage and destruction to the cultural heritage of Nepal, including the monuments in the UNESCO Kathmandu Valley World Heritage Site of Outstanding Universal Value.

These sites are not only central to the daily lives of thousands of Hindus and Buddhists but also represent a key source of tourism and foreign income for Nepal. A major programme of reconstruction and conservation is underway and Durham University expertise is helping to inform this.

Robin Coningham, UNESCO Professor in Durham University’s Department of Archaeology , has worked with the Nepali Government’s Department of Archaeology on a pilot project to undertake surveys and excavations at damaged sites across the Valley. The surveys use ground penetrating radar (GPR) to provide a detailed layout of archaeological features below the surface. Excavations allowed archaeologists, engineers and architects to evaluate the stability of the foundations prior to reconstruction.

The first phase of this work was completed in late 2015 and will guide the laying of new infrastructure and foundations to help protect the cultural heritage of the medieval city squares of Patan, Hanuman Dhoka and Bhaktapur.

“For the first time archaeological investigations have been pivotal in the aftermath of a natural disaster in South Asia. Our work has informed architects and engineers about the integrity of the foundations of the collapsed monuments to help guide the reconstruction and protection of this ancient site.

“Looking forward we hope this work will inform the methodologies and techniques used in the rebuilding of other heritage sites following natural disasters.”

More information about the research and its findings is available on the UNESCO website. Professor Coningham will begin a new phase of this work in October 2016.

Training the experts of tomorrow

Durham University has launched a new doctoral training programme in 2016 which will train the experts of the future in disaster risk reduction. The training programme, entitled Action on Natural Disasters, is run by the IHRR and will welcome its first group of students in autumn 2016.

The first students will undertake research around the theme of ‘earthquake-induced landslide hazards in Nepal’, recognising the significant and ongoing hazard that landslides pose in the country. Four PhD research projects have been developed with the aim of learning from the 2015 earthquake and building upon existing long-term collaborations the University has in Nepal.

The research projects will look at rapid detection of earthquake-triggered landslides; the impacts that road construction may have on landsliding; communicating risk to increase resilience to landslide dam bursts, and developing simple rules to help minimise landslide hazard.

The programme has been funded through donations and is the subject of the 2015-16 Chancellors Appeal.

“Durham University has a long-standing relationship with Nepal and we hope that this doctoral training programme will not only bring new insights through the research undertaken but also contribute to the training of the next generation of experts in risk reduction.”