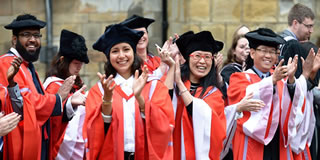 The number of Durham University subjects in the top 50 of the prestigious QS World University Subject Rankings has more than doubled from three to seven.

Geography at Durham is ranked third in the world and Archaeology fifth, with Anthropology, Earth Sciences, English, History and Law also in the top 50.

Today's subject-specific rankings follow on from Durham achieving its highest ever world ranking in the overall QS league table published last year, where it rose more than 30 places to 61st in the world.

The overall QS rankings also placed Durham 54th in the world for citations, recognising the impact and influence of its research among other academics, and 31st globally for employer reputation, giving recognition to the quality of, and international demand for, Durham's graduates.

Commenting on today's rankings, Durham University Vice-Chancellor Professor Stuart Corbridge said: "Our success in this global league table is a tremendous reflection on everyone who works at Durham where we are doing world-class research across all three of our faculties, in sciences, social sciences and health, and the arts and humanities.

"I am extremely proud that the work carried out in our departments has been recognised in this way. The significant rises we have made in these rankings really demonstrate the role we play globally in making an impact with our research and changing the world for the better."

Recent examples of research carried out by departments such as Geography include work on assessing the dangers of landslides in Nepal following earthquakes and crucially how risks can be mitigated. Also, Durham's archaeologists discovered and analysed skeletons found on the World Heritage Site which were shown to be the remains of Scottish soldiers who were marched down from Scotland after the Battle of Dunbar.

The QS World University Subject Rankings highlight the world's top universities in a range of popular subject areas. Published each year, the rankings are based on academic reputation, employer reputation and research impact.

To compile the rankings, the QS evaluated 4,226 universities, qualified 2,691 and ranked 945 institutions in total. Over 113 million citations attributions were analysed and the provision of over 15,530 programmes was verified.