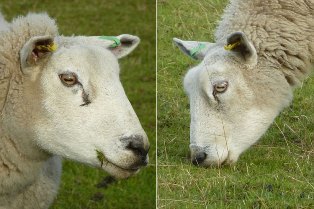 A research collaboration involving Durham University has found that pupil shape can be directly linked to an animal’s place on the food chain, as either the hunter or the prey.

Professor Gordon Love from Durham University’s Department of Physics worked in collaboration with Professor Martin Banks from University of California, Berkeley to try and explain why animals have evolved with different shaped pupils.

Professor Love explained: “Our research is the first to offer a quantitative explanation as to why some animals have vertically elongated pupils and others horizontal. We looked at the visual benefits of different pupil orientation and found a strong relationship between this and how animals feed – in short whether they are the hunter or the prey.”

To try and understand this, the researchers produced computer models of animal eyes in order to assess the visual benefits of different pupil orientations and how this links to animals place in the food chain.

The team noted that animals with vertically elongated pupils, such as foxes and domestic cats hide at close distance before striking their prey. These animals also tend to have eyes on the front of their head. Vertically elongated pupils allow these animals to judge distance without having to move their head which would risk giving away their position.

Meanwhile, animals with horizontally elongated pupils, such as sheep and goats, tend to be grazing animals who are prey for others. They therefore need to be able to scan their surroundings for threats. This group tend to have eyes on the side of their head, rather than the front. The team found that the horizontal alignment of the pupil allows more light to be received from both in front and behind, whilst limiting light from above and below. This, together with the location of the eyes gives these animals panoramic vision along the ground to help detect and flee from predators.

Finally, the team wanted to understand what happened when grazing animals bent their heads to eat. In theory this would mean their pupils were no longer horizontal to the ground, potentially making them more vulnerable to attack. However, in observing animals the researchers found that the eyes rotated when the head was lowered, enabling them to keep their pupils horizontal to the ground and therefore maintaining their panoramic vision.

Professor Love said: “This work tells us more about why animals may have evolved in certain ways, in response to their place on the food chain. It also further reveals just how remarkable their eyes and vison are and helps us to further understand how our eyes work.”

A video explaining more about this research is available online.