Wearing red can make you appear angry and dominant 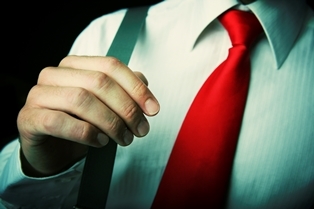 Men who wear red clothes send out a signal that they are angry and aggressive, in much the same way as if their face had reddened, suggests research.

When 50 male and 50 female volunteers were shown images of men in different coloured t-shirts, they rated those wearing red as more aggressive and angry than those in blue or grey.

The results of the research may have parallels in nature and could provide insights into whether it is advisable to wear red in certain social situations, said Rob Barton, Professor in Evolutionary Anthropology at Durham University, who led the study.

Red often signals aggression in animals - and the tendency for men to turn red-faced when they are angry is believed to be inherited from our ancient ancestors as a warning sign. In some animal species, red may be displayed by competing males trying to dominate each other to win the right to mate with females, he said.

Ms Wiedemann, who conducted the experiments, said: “We know that the colour red has an effect on the human brain. This is embedded in our culture, for example the idea of wearing a red tie – known as a ‘power tie’ - for business, or issuing a red alert.

“The implications of our research are that people may wish to think carefully about wearing red in social situations and perhaps important meetings, such as job interviews. Being perceived as aggressive or dominant may be an advantage in some circumstances but a disadvantage in others, for example where teamwork or trustworthiness is important.”

Durham University researchers have previously shown that wearing red can have effects in sport, promoting aggression and competitiveness within teams and intimidating opponents. Professor Barton and his team are currently talking to organisers of combat sports about the possibility of introducing new rules on competitors wearing red, to avoid the colour being used to unfair advantage.

However, the study published today, in the Royal Society journal, Biology Letters, is believed to be the first into the effects of colour on social perceptions of dominance and aggression in neutral settings.

To carry out the research, images of men were digitally manipulated, so they appeared to wear a variety of differently coloured t-shirts. These were shown to the volunteers, who rated them on a scale of 1-7 for both aggression and dominance.

The volunteers were also asked to decide on the emotional state of the man in each image. They tended to choose ‘angry’ for those wearing red, in preference to the other choices of happy, frightened and neutral.

Professor Barton said: “Taken together, our findings suggest a clear association between the colour red and perceptions of anger, possibly related to the role of facial reddening as a natural sign of anger.”

The Durham research team studied only the effects of men wearing red to limit the number of variables - the results would have been much harder to analyse if they had presented the volunteers with images of both sexes. However, the perceptions of women wearing red may be a topic for future research.