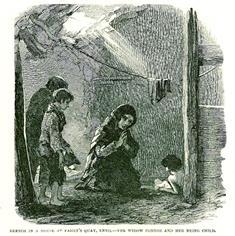 Baby teeth from children who died during the 1845-52 Irish famine could help predict the future health of children born today, according to new research by the Universities of Durham and Bradford.

The team analysed the teeth of children and adults from two 19th century cemeteries, one at a Workhouse in Ireland where famine victims were buried and the other in London, which holds the graves of some of those who fled the famine.

They found that the biochemical composition of teeth that were forming in the womb and during a child’s early years not only provided insight into the health of the baby’s mother, it even showed major differences between those infants who died and those who survived beyond early childhood.

Earlier work led by Dr Janet Montgomery and involving Dr Mandy Jay, both from Durham University’s Department of Archaeology, found similar results in people living in the Iron Age on the Isle of Skye and in Neolithic Shetland.

Dr Montgomery said: “Our work is revealing the childhood histories of ancient people at a level we simply could not achieve before. We can now identify periods of severe dietary and health stress in 19th century people we know suffered and died without access to modern medicine or support systems. Once we can recognise those signals, we can look for them in the teeth of both prehistoric and living children.

“The ability to reach back 5,000 years and reconstruct a small child's diet and health is as near to time travel as archaeologists get.”

These archaeological findings – published in the American Journal of Physical Anthropology – are now being tested in baby teeth from children born recently in Bradford and Sudan. If similar patterns can be seen in current day mothers and children, the researchers hope this could lead to a simple test on baby teeth to predict potential health problems in adulthood.

Levels of carbon and nitrogen isotopes within bone and teeth, and the relationship between the two, change with different diets, so baby teeth can reveal clues about the diet of the mother during pregnancy and the diet of the child immediately after birth. The first permanent molar also forms around birth and is retained into adulthood. Each layer of the tooth relates to around four months’ growth, starting in the womb, enabling it to be linked to a specific period of a baby’s life.

Lead researcher, Dr Julia Beaumont from the Department of Archaeological Sciences at the University of Bradford, said: “We know that stress and poor diet in mothers, both during pregnancy and after birth, can have an impact on a child’s development. In the past that could mean a child didn’t survive; now it’s more likely to mean a child has a greater risk of health issues in later life.

“While sometimes there are obvious signs of maternal stress in the baby at birth, such as a low birth weight, that isn’t always the case. So a simple test on teeth that are naturally shed by children as they grow could provide useful information about future health risks.”

The researchers hope that the insights gained from the historical graves can be used to help children in the future. Dr Beaumont is currently testing the teeth from children through the Born in Bradford project, a long term study of a cohort of 13,500 children, born between 2007 and 2010, whose health is being tracked from pregnancy through childhood and into adult life. The aim is to correlate nitrogen and carbon isotope levels to the medical history of the mother and the future health of the children.