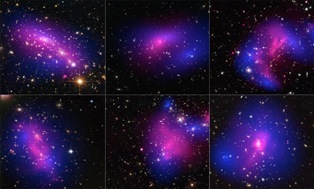 Dark matter interacts with itself even less than previously thought, narrowing down the options for what this mysterious substance might be, according to new research involving Durham University.

Astronomers made the finding using observations from the NASA/ESA Hubble Space Telescope and NASA’s Chandra X-ray Observatory to study how dark matter in clusters of galaxies behaves when the clusters collide.

The results are published in the journal Science.

To learn more about dark matter, which is invisible, researchers can study it in a way similar to experiments on visible matter — by watching what happens when it bumps into things.

For this reason, researchers look at vast collections of galaxies, called galaxy clusters, where collisions involving dark matter happen naturally and where it exists in vast enough quantities to see the effects of collisions.

The researchers used data from the NASA/ESA Hubble Space Telescope and NASA's Chandra X-ray Observatory to study 72 large cluster collisions. The collisions happened at different times, and are seen from different angles — some from the side, and others head-on.

The leading theory is that dark matter is spread evenly throughout the galaxy clusters so dark matter particles frequently get very close to each other.

The reason the dark matter doesn't slow down is because not only does it not interact with visible particles, it also interacts even less with other dark matter than previously thought.

"But it's difficult to interpret what you're seeing if you have just one example. Each collision takes hundreds of millions of years, so in a human lifetime we only get to see one freeze-frame from a single camera angle.

“Now that we have studied so many more collisions, we can start to piece together the full movie and better understand what is going on."

By finding that dark matter interacts with itself even less than previously thought, the team have successfully narrowed down the properties of dark matter. Particle physics theorists have to keep looking, but they now have a smaller set of unknowns to work with when building their models.

"We know how gas and stars react to these cosmic crashes and where they emerge from the wreckage. Comparing how dark matter behaves can help us to narrow down what it actually is," explained Dr David Harvey of the École Polytechnique Fédérale de Lausanne (EPFL) in Switzerland, lead author of the study.

To further increase the number of collisions that can be studied, the team is also looking to study collisions involving individual galaxies, which are much more common.

"There are still several viable candidates for dark matter, so the game is not over, but we are getting nearer to an answer," Dr Harvey said. "These 'Astronomically Large' particle colliders are finally letting us glimpse the dark world all around us, but just out of reach."

Image caption: This collage shows images of six different galaxy clusters taken with NASA's Hubble Space Telescope and Chandra X-ray Observatory. Using visible-light images from Hubble, researchers were able to map the post-collision distribution of stars and also of the dark matter (colored in blue), which was traced through its gravitational lensing effects on background light. Chandra was used to see the X-ray emission from impacted gas (pink).