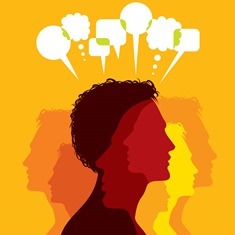 Voices in people’s heads are far more varied and complex than previously thought, according to new research by Durham and Stanford universities, published in The Lancet Psychiatry today.

One of the largest and most detailed studies to date on the experience of auditory hallucinations, commonly referred to as voice hearing, found that the majority of voice-hearers hear multiple voices with distinct character-like qualities, with many also experiencing physical effects on their bodies.

The study also confirmed that both people with and without psychiatric diagnoses hear voices.

The findings question some of the current assumptions about the nature of hearing voices and suggest there is a greater variation in the way voices are experienced than is typically recognised.

The researchers say this variation means different types of therapies could be needed for voice-hearers, such as tailored Cognitive Behavioural Therapy (CBT) geared towards distinct voice sub-types or patterns of voice hearing.

Current common approaches to help with voices include medication, CBT, voice dialogue techniques and other forms of therapy and self-help.

This is one of the first studies to shed light on the nature of voice-hearing both inside and outside schizophrenia, across many different mental health diagnoses.

Lead researcher Dr Angela Woods, from the Centre for Medical Humanities at Durham University, said: “Our findings have the potential to overturn mainstream psychiatric assumptions about the nature of hearing voices.

“We call into question the presumed auditory quality of hearing voices and show that there is an unrecognised complexity in the ‘character’ qualities of some voices.

“It is crucial to study mental health and human experiences such as voice-hearing from a variety of different perspectives to truly find out what people are experiencing, not just what we think they must be experiencing because they have a particular diagnosis. We hope this approach can help inform the development of future clinical interventions.”

The researchers, funded by the Wellcome Trust, collected answers to open- and close-ended questions through an on-line questionnaire focused on description of experiences from 153 respondents. The majority of respondents had been diagnosed with a psychiatric condition but 26 had no history of mental illness. Participants were free to respond in their own words.

The large majority of respondents described hearing multiple voices (81 per cent) with characterful qualities (70 per cent).

Less than half the participants reported hearing purely auditory voices with 45 per cent reporting either thought-like or ‘inbetween’ voices with some thought-like and some acoustic qualities. This finding challenges the view that hearing voices is always a perceptual or acoustic phenomenon, and may have implications for future neuroscientific studies of what is happening in the brain when people ‘hear’ voices.

66 per cent of people felt bodily sensations while hearing voices, such as feeling hot or tingling sensations in their hands and feet. Voices with effects on the body were more likely to be abusive or violent, and, in some cases, be linked to experiences of trauma.

While fear, anxiety, depression and stress were often associated with voices, 31 per cent of participants said they also felt positive emotions.

Co-author Dr Nev Jones from Stanford University said: “Our findings regarding the prevalence and phenomenology of non-acoustic voices are particularly noteworthy. By and large, these voices were not experienced simply as intrusive or unwanted thoughts, but rather, like the auditory voices, as distinct ‘entities’ with their own personalities and content. This data also suggests that we need to think much more carefully about the distinction between imagined percepts, such as sound, and perception.”