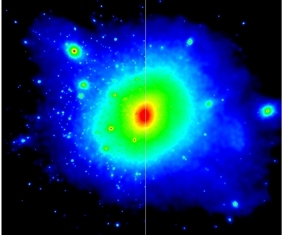 Scientists believe they have found a way to explain why there are not as many galaxies orbiting the Milky Way as expected.

Computer simulations of the formation of our galaxy suggest that there should be many more, smaller galaxies around the Milky Way than are observed through telescopes.

This has thrown doubt on the generally accepted theory of cold dark matter, a substance that scientists predict should allow for more galaxy formation around the Milky Way than is seen.

Now cosmologists and particle physicists at the Institute for Computational Cosmology (ICC) and the Institute for Particle Physics Phenomenology (IPPP), at Durham University, working with colleagues at LAPTh College & University in France, think they have found a potential solution to the problem.

Writing in the journal Monthly Notices of the Royal Astronomical Society (MNRAS), the scientists suggest that dark matter particles, as well as feeling the force of gravity, could have interacted with photons and neutrinos in the young Universe, causing the dark matter to scatter.

Scientists think clumps of dark matter – or halos – that emerged from the early Universe, trapped the intergalactic gas needed to form stars and galaxies.

Scattering the dark matter particles wipes out the structures that can trap gas, stopping more galaxies from forming around the Milky Way and reducing the number that should exist.

Lead author Dr Celine Boehm, in the Institute for Particle Physics Phenomenology, at, Durham University, said: “We don’t know how strong these interactions should be, so this is where our simulations come in.

“By tuning the strength of the scattering of particles, we change the number of small galaxies, which lets us learn more about the physics of dark matter and how it might interact with other particles in the Universe.

“This is an example of how a cosmological measurement, in this case the number of galaxies orbiting the Milky Way, is affected by the microscopic scales of particle physics.”

There are several theories about why there are not more galaxies orbiting the Milky Way, which include the idea that heat from the Universe’s first stars sterilised the gas needed to form stars.

The researchers say their current findings offer an alternative theory and could provide a novel technique to probe interactions between other particles and cold dark matter.

Co-author Professor Carlton Baugh, in the Institute for Computational Cosmology, at Durham University, said: “Astronomers have long since reached the conclusion that most of the matter in the Universe consists of elementary particles known as dark matter.

“This model can explain how most of the Universe looks, except in our own backyard where it fails miserably.

“The model predicts that there should be many more small satellite galaxies around our Milky Way than we can observe.

“However, by using computer simulations to allow the dark matter to become a little more interactive with the rest of the material in the Universe, such as photons, we can give our cosmic neighbourhood a makeover and we see a remarkable reduction in the number of galaxies around us than originally thought.”

The calculations were carried out using the COSMA supercomputer at Durham University, which is part of the UK-wide DiRAC super-computing framework.

The work was funded by the Science and Technology Facilities Council and the European Union.