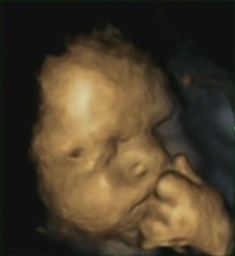 4-d scans of a fetus at 32 weeks gestation

Fetuses are more likely to show left-handed movements in the womb when their mothers are stressed, according to new research.

Researchers at Durham and Lancaster universities say their findings are an indicator that maternal stress could have a temporary effect on unborn babies, adding that their research highlights the importance of reducing stress during pregnancy.

However, the researchers emphasised that their study was not evidence that maternal stress led to fixed left-handedness in infants after birth. They said that some people might be genetically predisposed to being left-handed and that there are examples where right and left-handedness can switch throughout a person’s life.

The fetuses were scanned at four different stages between 24 and 36 weeks of pregnancy. Researchers also asked the mothers of these babies how much stress they had experienced in the four weeks between each of the scans.

The researchers found that the more stress mothers reported, the more frequently fetuses touched their faces with their left hands. They added that a significant number of touches by the fetuses of stressed mothers were done with their left, rather than right hands - therefore fetal touches of their own faces, indicated a left-handed tendency.

As right-handedness is more common in the general population, the researchers had expected to see more of a bias towards right-handed movements in the fetuses as they grew older. The high percentage of left-handed behaviour, observed only when mothers reported being stressed, led them to conclude that maternal stress has an effect on the lateral behaviour of the babies they scanned.

The findings are published in the journal Laterality: Asymmetries of Body, Brain and Cognition.

Lead author Dr Nadja Reissland, in Durham University’s Department of Psychology, said: “Our research suggests that stressed mothers have fetuses who touch their face relatively more with their left hand.

“Such measures may include increased emphasis on stopping stressful work early, the inclusion of relaxation classes in pre-natal care and involvement of the whole family in the pre-natal period.

“While we observed a higher degree of left-handed behaviour in the fetuses of stressed mothers than had been expected, we are not saying that maternal stress leads to a child becoming left-handed after birth, as there could be a number of reasons for this.

“The research does suggest, however, that a fetus can detect when a mother is stressed and that it responds to this stress.”

Professor Brian Francis, of Lancaster University, emphasised that the study also showed that overall preference for left or right hand varied considerably from scan to scan within each fetus, though fetuses showed more left-hand movements when mothers reported that they had experienced stress. He said: "Overall, there was no consistent handedness preference being shown by the fetuses, with most fetuses switching in preference at least once over the four scans.”

The researchers added that while mothers were asked to report their stress levels in the four weeks between scans, in practice some might have reported the stress they were experiencing at the time of being surveyed.

Previous research has shown that maternal stress in pregnancy leads to increased levels of cortisol – a hormone produced in response to stress - in mothers that could lead to an altered preference for left-sided or right-sided behaviour in fetuses.

The current study did not assess the stress levels of fetuses and Dr Reissland said that future research could examine cortisol levels in fetuses to further determine the effect of stress on lateral behaviour.

Dr Reissland added that further research was also needed to look at whether or not maternal prenatal stress had longer-term effects on the development of infants and children after birth.