Archaeologists discover the earliest complete example of a human with cancer 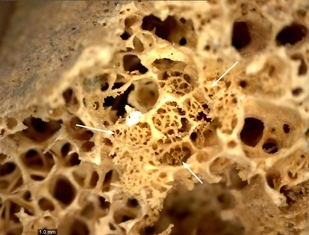 Lytic lesion in the spinous process of the 5th thoracic vertebra

Archaeologists have found the oldest complete example in the world of a human with metastatic cancer in a 3,000 year-old skeleton.

The findings are reported in the academic journal PLOS ONE.

The skeleton of the young adult male was found by a Durham University PhD student in a tomb in modern Sudan in 2013 and dates back to 1200BC.

Analysis has revealed evidence of metastatic carcinoma, cancer which has spread to other parts of the body from where it started, from a malignant soft-tissue tumour spread across large areas of the body, making it the oldest convincing complete example of metastatic cancer in the archaeological record.

The researchers from Durham University and the British Museum say the discovery will help to explore underlying causes of cancer in ancient populations and provide insights into the evolution of cancer in the past. Ancient DNA analysis of skeletons and mummies with evidence of cancer can be used to detect mutations in specific genes that are known to be associated with particular types of cancer.

Even though cancer is one of the world’s leading causes of death today, it remains almost absent from the archaeological record compared to other pathological conditions, giving rise to the conclusion that the disease is mainly a product of modern living and increased longevity. These findings suggest that cancer is not only a modern disease but was already present in the Nile Valley in ancient times.

Lead author, Michaela Binder, a PhD student in the Department of Archaeology at Durham University, excavated and examined the skeleton. She said: “Very little is known about the antiquity, epidemiology and evolution of cancer in past human populations apart from some textual references and a small number of skeletons with signs of cancer.

“Insights gained from archaeological human remains like these can really help us to understand the evolution and history of modern diseases.

“Our analysis showed that the shape of the small lesions on the bones can only have been caused by a soft tissue cancer even though the exact origin is impossible to determine through the bones alone.”

The skeleton is of an adult male estimated to be between 25-35 years old when he died and was found at the archaeological site of Amara West in northern Sudan, situated on the Nile, 750km downstream of the country’s modern capital Khartoum. It was buried extended on his back, within a badly deteriorated painted wooden coffin, and provided with a glazed faience amulet as a grave good.

Previously, there has only been one convincing, and two tentative, examples of metastatic cancer predating the 1st millennium BC reported in human remains. However, because the remains derived from early 20th century excavations, only the skulls were retained, thus making a full re-analysis of each skeleton, to generate differential (possible) diagnoses, impossible.

Co-author, Dr Neal Spencer from the Department of Ancient Egypt and Sudan at the British Museum, said: “From footprints left on wet mud floors, to the healed fractures of many ancient inhabitants, Amara West offers a unique insight into what it was like to live there – and die – in Egyptian-ruled Upper Nubia 3200 years ago.”

The skeleton was examined by experts at Durham University and the British Museum using radiography and a scanning electron microscope (SEM) which resulted in clear imaging of the lesions on the bones. It showed cancer metastases on the collar bones, shoulder blades, upper arms, vertebrae, ribs, pelvis and thigh bones.

The cause of the cancer can only be speculative but the researchers say it could be as a result of environmental carcinogens such as smoke from wood fires, through genetic factors, or from infectious diseases such as schistosomiasis which is caused by parasites.

They say that an underlying schistosomiasis infection seems a plausible explanation for the cancer in this individual as the disease had plagued inhabitants of Egypt and Nubia since at least 1500BC, and is now recognised as a cause of bladder cancer and breast cancer in men.

Michaela Binder added: “Through taking an evolutionary approach to cancer, information from ancient human remains may prove a vital element in finding ways to address one of the world’s major health problems.”

The tomb, where the skeleton was found, appears to have been used for high-status individuals from the town, but not the ruling elite, based on the tomb architecture and aspects of funerary ritual.

The tomb’s architecture is evidence of a hybrid culture blending Pharaonic elements (burial goods, painted coffins) with Nubian culture (a low mound to mark the tomb).

The well preserved pottery recovered from the tomb provides a date within the 20th Dynasty (1187-1064BC), a period when Egypt ruled Upper Nubia, endured conflicts with Libya and while pharaohs such as Ramses III were being buried in the Valley of the Kings.

The research was funded by the Leverhulme Trust and the Institute of Bioarchaeology Amara West Field School, with the permission of the National Corporation of Antiquities and Museums in Sudan.