Durham celebrates 100 years of Crystallography with front cover of Science 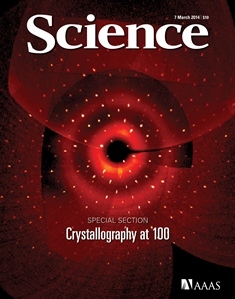 Science: Reprinted with permission from AAAS

A review article led by Professor Judith Howard, in Durham’s Department of Chemistry, is one of the main features in Science’s 100 year celebration of Crystallography.

X-ray Crystallography has become the leading technique for studying the structure of matter at the atomic and molecular level and is essential in the development of new materials.

Together with former Durham PhD student Dr Michael Probert, in the School of Chemistry at Newcastle University, Professor Howard has reviewed recent developments in single-crystal X-ray studies of chemical and materials sciences.

A stunning image of X-ray diffraction data collected from a benzene single crystal taken during research carried out by Professor Howard and Dr Probert appears on the front cover of the latest issue of Science.

Also in January this year Professor Howard delivered the prestigious 2014 Crystallography Bragg Lecture at the Royal Institution. The Bragg lectures are given in honour of esteemed scientists William Henry Bragg and his son William Lawrence Bragg who were both Directors of the Royal Institution.

Professor Howard, who was female president of the British Crystallographic Association from 1992-1996, said: “Crystallography is such a fascinating and wide ranging science with entry points from all of the scientific disciplines and perhaps now we can add ‘History of Science’ as we are 100 years old.

“It is also a discipline where women have made a very significant contribution and a subject represented by the UK’s only female Nobel laureate, my Oxford DPhil supervisor, Dorothy Hodgkin, who was awarded the prize in 1964 for her work on ‘Molecular Structure of Biological Importance’.”

Image details: Precession image reconstructed from x-ray diffraction data collected from a benzene single crystal. For the past 100 years, x-ray crystallography has been a key tool for determining the structures of ever more complex chemical and biochemical systems. See the special section beginning on page 1091 and at www.sciencemag.org/special/crystallography.