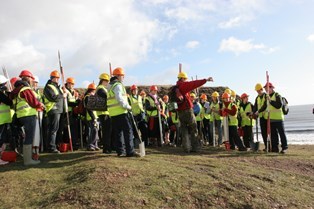 Durham University has reinforced its position as a world-leading centre of research and learning according to its successful results in the latest QS World Rankings by Subject.

The University’s Department of Geography is ranked fourth in the world, one place up on last year.

Another three other subjects; Earth Sciences, History and Physics also appeared in the world top 50.

Durham has one of the oldest and largest departments of Geography in the country, with more than 60 academics and a large graduate school allowing it to deliver research excellence in both human and physical geography. Research in the department is clustered on seven key areas in which it has world leading excellence.

In Physical Geography, research focuses on the themes of catchments and river systems, hazards in relation to earthquakes and mass movement, and ice sheets and their contribution to sea level change. Recent examples of work in these areas include Professor Mike Bentley’s finding that the glacier of the West Antarctic Ice Sheet is the largest single contributor to global sea level rise and staff collectively developing a family of computer modelling tools which predict and map the likely critical sources of pollution or flooding in river catchments.

In Human Geography, research focuses on the themes of the governance of people and territories; issues of urban development, inequality and fostering sustainable cities; exposing economic processes to cultural explanation; and inequalities in wealth, health, living conditions and life-chances. Recent examples of this work in public include Professor Harriet Bulkeley addressing the UN General Assembly on Sustainable Cities & Climate Change, and Professor Louise Amoore discussing risk and surveillance of terrorism suspects on BBC Radio 4.

The QS World University Rankings by Subject are annual university rankings published by Quaquarelli Symonds (QS) which provides rankings for individual subjects. QS also provides a league table for overall rankings which will be published in the autumn.

In the 2013/14 QS World University Rankings, published in September 2013, Durham was ranked in the Top 50 for its Arts and Humanities. It was ranked among the world’s top 100 universities and in the top 25 globally for employer reputation when it comes to the quality of - and demand for - its graduates.

Professor Chris Higgins, Vice-Chancellor of Durham University, said: “Durham University is pleased to have maintained such a consistently high position in the QS World Rankings by Subject, further confirming that we are among the top universities in the world.

“Our students benefit from having excellent research and teaching delivered by world-leading academics, combined with our collegiate system and access to superb extra-curricular activities and opportunities such as sport, the arts and community outreach.

“The Durham experience gives students the opportunity to develop crucial skills such as leadership, critical thinking and entrepreneurship that make our graduates some of the most sought-after in the world by leading employers.”