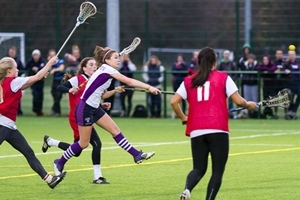 Durham University Women’s Lacrosse Team made history this weekend by taking on the Team England Development Squad and winning 17-7. The game was part of a planned training event being held at Durham University.

This was the first time that a university Lacrosse team has played the national squad and was therefore a key opportunity for the Durham players.

It recently became the first university to be awarded the English Lacrosse High Performance University status. The award recognises the quantity and quality of talent delivered through the lacrosse programme at the University and is part of English Lacrosse’s development of the Elite Playing Pathway.

Anna Sody, Women’s Head Coach at Durham University, says: “This was a significant event for our team and gave our players a real chance to stretch themselves. They trained very hard up to the event for five hours each week with additional strength and conditioning sessions and it really paid off; they shone on their home ground.”

The match took place on the University’s new 3G rubber crumb pitch, which was officially opened by the Strategic Lead for Sport England, Judith Rasmussen moments before the game commenced. The quality of a pitch surface is important to the sporting experience; this rubber crumb pitch enables players to pick up speed, making the game faster.

Durham’s latest rubber crumb pitch has been part-funded by Sport England’s Improvement Fund and will benefit students as well as thousands of people in the local community.

Anna Sody continues: “We have a firm belief that the best way to develop as a player is to train with the strongest possible squad and this match is an example of the kind of challenge we can offer to our players.

“We had an amazing time playing the Team England Squad and we walked away with so much more experience and insight.”

Quentin Sloper, Head of Sport at Durham University, said: “We recognise that talented athletes not only search for a University that meets their academic requirements but also one that will assist in developing their lacrosse careers. As the first English Lacrosse High Performance University, we give our students the support that is required to achieve international success.”

Recent investment in sports facilities at Durham University totals more than £12m. A new £6.7m world-class sports facility was recently opened in Durham, which together with the £5.3 million sports centre at Queen’s Campus, Stockton cements the University’s global reputation as a centre for sporting excellence.

Some 92 per cent of Durham University's students participate in sport at all levels, believed to be the highest such participation rate at a UK University. The University also runs an acclaimed community outreach programme totalling 40 projects - the largest of its kind in the UK.