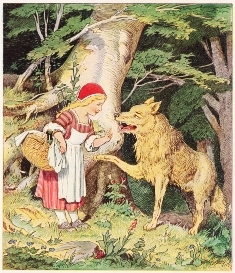 New insights into the origins and development of folk tales such as Little Red Riding Hood are being provided by the application of scientific analysis more commonly used by biologists to produce an evolutionary tree of life diagram.

In the scientific journal, PLOS ONE, Dr Jamie Tehrani, an anthropologist at Durham University, resolves a long-running debate by demonstrating that Little Red Riding Hood shares a common but ancient root with another popular international folk tale The Wolf and the Kids, although the two are now distinct stories.

“This is rather like a biologist showing that humans and other apes share a common ancestor but have evolved into distinct species,” explained Dr Tehrani, who found that The Wolf and the Kids probably originated in the 1st century AD, with Little Red Riding Hood branching off 1,000 years later.

The Wolf and the Kids, popular in Europe and the Middle East, is a story about a wolf who impersonates a nanny goat and devours her kids, whereas Little Red Riding Hood is about a wolf who devours a young girl after impersonating her grandmother. Variants of the story are common in Africa and Asia, for example, The Tiger Grandmother in Japan, China and Korea.

Little Red Riding Hood was told by the Brothers Grimm 200 years ago but that version was based on an earlier, 17th century, story written by the Frenchman Charles Perrault, which itself derived from an older, oral tradition of storytelling in France, Austria and northern Italy.

Dr Tehrani subjected 58 variants of the folk tales with phylogenetic analysis, a method more commonly used by biologists for grouping together closely-related organisms to form a tree of life diagram, mapping out the various branches of evolution from the earliest life forms.

Phylogenetics involves a mathematical modelling process that compares similarities between the plot variables and scores them according to the probability that they have the same origin. This enables a tree to be constructed showing the most likely paths, or branches, of the evolution of the story.

“This exemplifies a process biologists call convergent evolution, in which species independently evolve similar adaptations. The fact that Little Red Riding Hood ‘evolved twice’ from the same starting point suggests it holds a powerful appeal that attracts our imaginations.

“There is a popular theory that an archaic, ancestral version of Little Red Riding Hood originated in Chinese oral tradition. It is claimed the tale spread west, along the Silk Route, and gave rise to both The Wolf and the Kids and the modern version of Little Red Riding Hood. My analysis demonstrates that in fact the Chinese version is derived from European oral traditions, and not vice versa.

“This implies that the Chinese version is not derived from literary versions of Little Red Riding Hood but from the older, oral version, with which it shares crucial similarities. It is therefore understandable that previous scholars have assumed it to be ancestral to the European tale – but actually it’s the other way around.”

Dr Tehrani, whose research is funded by Research Councils UK, is now applying phylogenetics to other folk tales and believes that his research could shed light on the migration patterns of humans in ancient times, by determining the origins and evolution of the folk stories being told at various locations and dates.