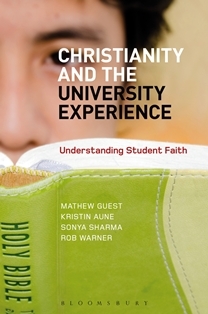 Religious leaders face a fresh challenge in engaging with young Christians, after new research revealed that large numbers of Christian university students are affirming their faith in private, but staying away from church on Sundays.

Christianity attracts far more students than any other religious tradition, but most of these have begun to detach themselves from church by the time they reach this formative stage in life, the researchers found.

Among Christian students, over half never attend church during term-time. The Church needs to consider how it can better engage with “the interests and enthusiasms of this generation,” the researchers added.

A total of 4,500 undergraduate students were surveyed and 100 interviews were carried out for the study, published as a book entitled Christianity and the University Experience: Understanding Student Faith.

The research team, also including academics from the universities of Chester, Derby and Kingston University London, found that most Christian students were typically moderate in their religious beliefs, tolerant in their attitudes to others, and liberal when it came to morality. Very few appear unreservedly supportive of the authority of the churches, the study found.

The researchers said most Christian students were “far closer to the social mainstream than the evangelical groups that often speak the loudest among Christians in public debates”.

Lead author Dr Mathew Guest, of Durham University’s Department of Theology and Religion, said: “When many think of religion on university campuses two things come to mind: an intense faith affirmed by evangelical Christians and some Muslims, and an equally intense atheism, expressed by young sceptics as a protest against religion.

“Moderate or liberal Christianity rarely enters the conversation, assumed to be a long spent force favoured by older generations.

“And yet our research found that this description reflects the values of the majority of students who identify Christianity as their religion of choice. In fact, liberal Christians outnumber evangelicals tenfold.

“With the vast majority of Christian students affirming a moderate expression of values in keeping with wider British culture, the Church faces a difficult decision about whether to adapt to changing times or risk permanently alienating an entire generation.

“Moreover, as educated, upwardly mobile individuals, the Church risks alienating an important demographic group – the future leaders of society who could be major standard bearers for Christian tradition.

“The challenge for the Church will be finding a way of engaging the interests and enthusiasms of this generation.”

Christianity and the University Experience: Understanding Student Faith, is published by Bloomsbury.