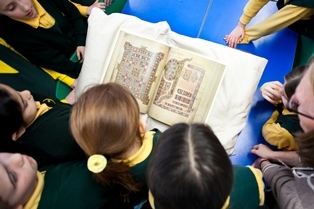 The Lindisfarne Gospels exhibition has been hailed an overwhelming success by its programme partners.

Durham University is now preparing for its next and entirely different exhibition, called Robot!

As part of the outreach programme, 20,000 children took part in learning sessions and workshops with the resources now incorporated into schools’ teaching.

Initial evaluation has indicated that visitors came from every area of the UK and there were significant numbers of international visitors from across Europe and further afield including the USA, Canada, Australia, New Zealand, South America and Africa.

In addition, the programme worked across the region to deliver almost 1,000 individual events at churches, museums, attractions, galleries and community venues. Events inspired by the Lindisfarne Gospels took place as far north as the Isle of Canna in Scotland and as far west as Preston.

Feedback from businesses suggests that it has had a significant benefit to the local economy and Durham traders are already declaring that 2013 has been their best year ever. Now that the exhibition and events have come to a close, partners will undertake a full evaluation and economic impact assessment.

Professor Chris Higgins, Vice-Chancellor and Warden of Durham University, presenting sponsor and host of the Lindisfarne Gospels Durham exhibition, said: “As a University and the presenting partner, we saw it as our role to engage people with the story of the Gospels beyond the exhibition within schools and community groups, and to deliver an experience that could be enjoyed by people of all ages, from different walks of life and from different parts of the globe. With almost 100,000 visitors to the exhibition from around the world and outreach sessions delivered to more than 20,000 children, we are thrilled that this has been achieved.

“The engagement programme used for the Lindisfarne Gospels exhibition will now act as a blueprint for the outreach programme for all our heritage collections, museums and libraries.

“The investment in Palace Green Library now also means we have the highest standards of exhibition facilities capable of hosting important artefacts from around the world, combined with extensive expertise in exhibition planning and managing necessary environmental conditions.

“The exhibition of course could not have happened without a strong partnership with the British Library, who loaned the Lindisfarne Gospels and St Cuthbert Gospel so that the public from across the region could see these two unique items.

Programme partners, Durham University, Durham County Council and Durham Cathedral, will seek to build on the success of Lindisfarne Gospels Durham, with Durham’s UNESCO World Heritage Site as the centrepiece for events, activities and learning, not just in Durham but across the North East.

Roly Keating, Chief Executive of the British Library said: “The British Library is delighted to have played a role in what was clearly one of the blockbuster exhibitions of the summer and we’d like to congratulate Durham on its success. The exhibition involved months of planning and close co-ordination between the Library and our partners in the North East and we look forward to discussing how we can build on this success in the future.”

Over the coming weeks the exhibition will be dismantled and the treasures on display will be returned to the institutions who kindly loaned them. Much of the exhibition will also be recycled and the interactive Wolfson Gallery will re-open on 24 October showing the creation and making of the Gospels as well as new exhibits detailing the highlights of Lindisfarne Gospels Durham 2013.

Meanwhile the St Cuthbert Gospel will be returning to Durham in April 2014 until July 2014 and will go on display in the History of the Book Gallery at Durham University’s Palace Green Library.

The next major exhibition at Palace Green Library will be Robot! From 23 November to 27 April 2014 visitors can meet some of the metal stars of the big screen face to face, track robots through time and space and enjoy classic Sci-Fi comics and books that have activated the imaginations of readers for decades.

Dr Keith Bartlett, Programme Director for Lindisfarne Gospels Durham, said: “The fantastic success of this exhibition and programme is testament to the hard work and commitment shown right across the region. We would like to thank all those who visited the exhibition and participated in events.