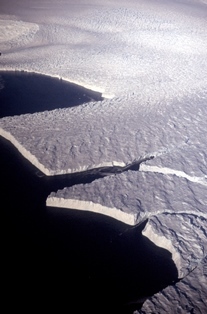 The world’s largest ice sheet could be more vulnerable to the effects of climate change than previously thought, according to new research from Durham University.

A team from the Department of Geography used declassified spy satellite imagery to create the first long-term record of changes in the terminus of outlet glaciers – where they meet the sea – along 5,400km of the East Antarctic Ice Sheet’s coastline. The imagery covered almost half a century from 1963 to 2012.

Using measurements from 175 glaciers, the researchers were able to show that the glaciers underwent rapid and synchronised periods of advance and retreat which coincided with cooling and warming.

The researchers said this suggested that large parts of the ice sheet, which reaches thicknesses of more than 4km, could be more susceptible to changes in air temperatures and sea-ice than was originally believed.

Current scientific opinion suggests that glaciers in East Antarctica are at less risk from climate change than areas such as Greenland or West Antarctica due to its extremely cold temperatures which can fall below minus 30°C at the coast, and much colder further inland.

But the Durham team said there was now an urgent need to understand the vulnerability of the East Antarctic Ice Sheet, which holds the vast majority of the world’s ice and enough to raise global sea levels by over 50m. The findings are published in the prestigious scientific journal Nature.

Dr Chris Stokes, in Durham’s Department of Geography, said: “We know that these large glaciers undergo cycles of advance and retreat that are triggered by large icebergs breaking off at the terminus, but this can happen independently from climate change.

“It was a big surprise therefore to see rapid and synchronous changes in advance and retreat, but it made perfect sense when we looked at the climate and sea-ice data.

“When it was warm and the sea-ice decreased, most glaciers retreated, but when it was cooler and the sea ice increased, the glaciers advanced.

“In many ways, these measurements of terminus change are like canaries in a mine – they don’t give us all the information we would like, but they are worth taking notice of.”

The researchers found that despite large fluctuations in terminus positions between glaciers – linked to their size – three significant patterns emerged:

Trends in temperature and glacier change were statistically significant along the East Antarctic Ice Sheet’s warmer Pacific Coast, but no significant changes were found along the much cooler Ross Sea Coast, which might be expected if climate is driving the changes, the Durham researchers said.

Dr Stokes said that the cause of the recent trends in air temperature and sea ice were difficult to unravel but were likely to reflect a combination of both natural variability and human impacts.

However, he added that the changes observed in glaciers in East Antarctica needed further investigation against the backdrop of likely increases in both atmospheric and ocean temperatures caused by climate change.

Dr Stokes said: “If the climate is going to warm in the future, our study shows that large parts of the margins of the East Antarctic Ice Sheet are vulnerable to the kinds of changes that are worrying us in Greenland and West Antarctica – acceleration, thinning and retreat.

“When temperatures warm in the air or ocean, glaciers respond by retreating and this can have knock-on effects further inland, where more and more ice is drawn-down towards the coast.

“We need to monitor their behaviour more closely and maybe reassess our rather conservative predictions of future ice sheet dynamics in East Antarctica.”