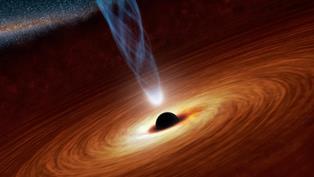 Astronomers have found a new way of measuring the spin in supermassive black holes, which could lead to better understanding about how they drive the growth of galaxies.

The scientists at Durham University, observed a black hole - with mass 10 million times that of our Sun - at the centre of a spiral galaxy 500 million light years from Earth while it was feeding on the surrounding disc of material that fuels its growth and powers its activity.

By viewing optical, ultra-violet and soft x-rays generated by heat as the black hole fed, they were able to measure how far the disc was from the black hole.

This distance depends on black hole spin as a fast spinning black hole pulls the disc in closer to itself, the researchers said. Using the distance between the black hole and the disc, the scientists were able to estimate the spin of the black hole.

Black holes lie at the centres of almost all galaxies, and can spit out incredibly hot particles at high energies that prevent intergalactic gases from cooling and forming new stars in the outer galaxy. Scientists don’t yet understand why the jets are ejected into space, but the Durham experts believe that their power could be linked to the spin of the black hole.

Spin is difficult to measure as it only affects the behaviour of material really close to the black hole.

The research, funded by the Science and Technology Facilities Council, is published in Monthly Notices of the Royal Astronomical Society.

“Understanding this connection between stars in a galaxy and the growth of a black hole, and vice-versa, is key to understanding how galaxies form throughout cosmic time.

“If a black hole is spinning it drags space and time with it and that drags the accretion disc, containing the black hole’s food, closer towards it. This makes the black hole spin faster, a bit like an ice skater doing a pirouette.

“By being able to measure the distance between the black hole and the accretion disc, we believe we can more effectively measure the spin of black holes.

“Because of this, we hope to be able to understand more about the link between black holes and their galaxies.”

The Durham scientists were able to measure the spin of the black hole using soft x-ray, optical and ultra-violet images captured by the European Space Agency’s XMM-Newton satellite.

They said further research was needed to reduce the effects of black hole mass on their findings.