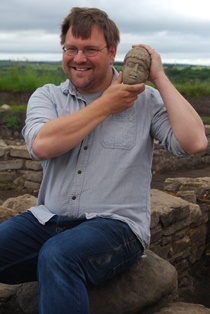 Dr David Petts on site with the Binchester head

An 1,800-year-old carved stone head of what is believed to be a Roman god has been unearthed in an ancient rubbish dump.

Archaeologists made the discovery at Binchester Roman Fort, near Bishop Auckland, in County Durham.

First year Durham University archaeology student Alex Kirton found the artefact, which measures about 20cm by 10cm, in buried late Roman rubbish within what was probably a bath house.

The sandstone head, which dates from the 2nd or 3rd century AD, has been likened to the Celtic deity Antenociticus, thought to have been worshipped as a source of inspiration and intercession in military affairs.

A similar sandstone head, complete with an inscription identifying it as Antenociticus, was found at Benwell, in Newcastle upon Tyne, in 1862.

“We found the Binchester head close to where a small Roman altar was found two years ago. We think it may have been associated with a small shrine in the bath house and dumped after the building fell out of use, probably in the 4th century AD

“It is probably the head of a Roman god – we can’t be sure of his name, but it does have similarities to the head of Antenociticus found at Benwell in the 19th century.

“We may never know the true identity of this new head, but we are continuing to explore the building from which it came to help us improve our understanding of late Roman life at Binchester and the Roman Empire’s northern frontier in Northern England.

“Antenociticus is one of a number of gods known only from the northern frontier, a region which seems to have had a number of its own deities.

“It's also an excellent insight into the life and beliefs of the civilians living close to the Roman fort. The style is a combination of classical Roman art and more regional Romano-British traditions. It shows the population of the settlement taking classical artistic traditions and making them their own.”

“As an archaeology student this is one of the best things and most exciting things that could have happened.”

He added: “It was an incredible thing to find in a lump of soil in the middle of nowhere – I've never found anything remotely exciting as this.”

“The head is a welcome addition to the collection of sculpture and inscriptions from Binchester. Previous religious dedications from the site feature deities from the classical pantheon of gods and goddesses such as the supreme god Jupiter and those associated with healing and good health such as Aesculapius, Salus and Hygeia.

“This one however appears to represent a local Romano-Celtic god of the type frequently found in the frontier regions of the Empire and probably representing the conflation of a classical deity with its local equivalent. The similarity with the head of Antenociticus is notable, but this could be a deity local to Binchester.”

The Binchester head is African in appearance, but Dr Petts, who is also Associate Director of Durham University’s Institute of Medieval and Early Modern Studies, said experts were unsure whether these features were deliberate or coincidental.

He explained: “This is something we need to consider deeply. If it is an image of an African, it could be extremely important, although this identification is not certain.”

Dr Mason added: “The African style comparison may be misleading as the form is typical of that produced by local craftsmen in the frontier region.”

The find was made as part of a five year project at Binchester Roman Fort which is shedding new light on the twilight years of the Roman Empire.

The Binchester dig is a joint project between Durham University’s Department of Archaeology, site owner Durham County Council, Stanford University’s Archaeology Centre and the Architectural and Archaeological Society of Durham and Northumberland.

Each summer, undergraduate archaeology students from Durham and the United States are joined by volunteer members of the public to painstakingly reveal more fascinating details from Binchester’s past.

* Visitors attending the Binchester Roman Festival on the weekend of July 13/14 will be able to see the head for themselves, along with other objects found during the current excavations. The Festival features guided tours of the excavations by Dr Mason as well as a programme of re-enactment events including firing of a full-size model of a ballista, a Roman artillery catapult, and demonstrations of ancient riding and fighting skills.

Binchester – known to the Romans as Vinovia – was established in the later 1st century AD and was once the largest Roman fort in County Durham.

Sited on the main Roman road between the legionary headquarters at York and Hadrian's Wall, it controlled an important crossing point over the River Wear. It was also surrounded by the remains of a substantial settlement which would have housed the civilian population.

The major excavation fieldwork has been underway since 2009 and focuses on a section of the fort interior and a sample area of the nearby civilian settlement.

Previous finds at the site have included the remains of very late Roman activity at the fort, among them evidence for large-scale leather production dating to the very final years of Roman control in Britain in the late 4th and early 5th century AD.

Other evidence discovered at Binchester, including structures and artifacts, might also indicate continued occupation at the site into the early medieval period.

The archaeologists’ work at the site featured on BBC Two’s Digging for Britain in 2011 and on Channel Four’s Time Team in 2008.

About Antenociticus – a “Geordie” Roman god?

A carved stone head depicting Antenociticus was found in 1862 at a temple dedicated to the deity at Benwell, Newcastle upon Tyne. Fragments of a forearm and a lower leg were also found, suggesting that the head may have been part of a life-sized statue

The small temple of Antenociticus stands in the vicus (civilian settlement) outside Benwell (Condercum) Fort, one of 13 permanent forts added to the line of Hadrian’s Wall during its construction.

The temple was built in about AD 178-80, probably to mark the promotion of the Roman cavalry prefect who dedicated one of three altars in the temple to Antenociticus.

Antenociticus is not mentioned at any other Romano-British site or on any inscriptions from the Continent, hence his identification as a local deity.

The Benwell head is now on display at Newcastle’s Great North Museum: Hancock.