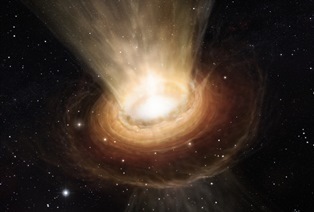 New evidence showing that black holes eject dusty matter from their surroundings, potentially affecting the growth of galaxies, has been revealed by an international team of scientists.

The researchers used a powerful telescope – with enough resolution to read a road sign in New York from London – to view the black hole at the centre of an active spiral galaxy 150 million light years from Earth.

The scientists, including Dr Poshak Gandhi, Department of Physics, found that some of the matter fuelling the black hole was being ejected from its centre via its polar regions in the form of warm dust and spat back out into the galaxy.

The general understanding of black holes is that dusty material – made up largely of silicate and graphite grains - is arranged in a flat, doughnut shape, disc and falls into the black hole to fuel it, thereby feeding its growth.

The discovery could have important implications for understanding the link between the growth of galaxies and black holes, which are thought to be at the centre of most large galaxies including the Milky Way, the scientists said.

The research, funded by the German Science Foundation, European Southern Observatory (ESO) and in the UK by the Science and Technology Facilities Council (STFC) is published in The Astrophysical Journal.

Pairing the four telescopes of the ESO’s Very Large Telescope (VLT), based in Chile, the scientists studied the black hole - which has a mass 100 million times bigger than our Sun - at the centre of the galaxy NGC 3783.

Although the observed hot dust — at some 700 degrees Celsius — was in a doughnut shape as expected, the researchers found huge amounts of cooler dust at right angles, above and below this main doughnut.

Dr Poshak Gandhi, in the Department of Physics, said that until now scientists had mainly considered “infall” of the dusty material on to black holes in relation to galaxy growth.

Dr Gandhi, a STFC Ernest Rutherford Fellow, added: “This is the first time that we have had sufficient magnifying power to study the shape and distribution of the dusty material in this galaxy.

“We found that as hot dust infalls on to the black hole, a fraction of this material does not reach the centre, but instead gets spat out and recycled to the galaxy.

“The perpendicular dust orientation we observed suggests we are seeing a warm dusty “wind” which is emerging from near the black hole and flowing out to the galaxy.

“This doesn’t look anything like the doughnut shape we were expecting to see. It is a completely new view of the origin of infrared light from black holes.”

Team leader Dr Sebastian Hoenig, currently at the University of Kiel, in Germany, said: “Our findings are important in understanding the growth of black holes and galaxies.

“Models of the dusty material around the black hole do not usually consider the effects of dust being spat outwards from the black hole, because we have had little prior observational evidence. Our findings give new insight into understanding the self-regulation of galaxy growth.”