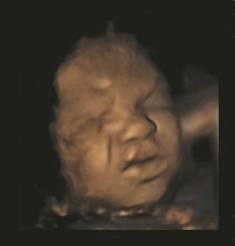 Unborn babies ‘practise’ facial expressions of pain in the womb, according to a study published today.

The researchers from Durham and Lancaster Universities suggest that fetuses’ ability to show a “pain” facial expression is a developmental process which could potentially give doctors another index of the health of a fetus.

The study is published in the prestigious academic journal, PLOS ONE, and was part funded by the Economic and Social Research Council (ESRC) and Durham University.

The study extends the findings of previous work demonstrating that the facial expressions of healthy fetuses develop and become more complex during pregnancy resulting in fetuses being able to show recognisable facial expressions.

The researchers suggest this is an adaptive process which enables the unborn baby to prepare themselves for life after birth when they have to communicate, for example if they feel hungry or uncomfortable, by making grimaces or crying.

The researchers used the video footage of 4D scans, observing repeatedly the facial expressions of eight female and seven male fetuses from the second to third trimester (24 to 36 weeks) of pregnancy.

Fetuses observed at 24 weeks gestation rarely showed a combination of facial movements which make up a ‘pain face’, such as lowering the eyebrows, wrinkling the nose and stretching the mouth. However, by 36 weeks gestation, a combination of at least four movements was seen rather more frequently, giving the impression that these older fetuses were capable of making a pain face.

Lead researcher Dr Nadja Reissland, of Durham University’s Department of Psychology, said: “It is vital for infants to be able to show pain as soon as they are born so that they can communicate any distress or pain they might feel to their carers and our results show that healthy fetuses ‘learn’ to combine the necessary facial movements before they are born.

“This suggests that we can determine the normal development of facial movements and potentially identify abnormal development too. This could then provide a further medical indication of the health of the unborn baby.

“It is not yet clear whether fetuses can actually feel pain, nor do we know whether facial expressions relate to how they feel. Our research indicates that the expression of fetal facial movements is a developmental process which seems to be related to brain maturation rather than being linked to feelings.”

Professor of Social Statistics at Lancaster University Brian Francis said: “Modern methods of data analysis enable the development of fetal pain faces to be clearly detected, with the complexity of facial movements making up a pain face increasing in the third trimester”.

Despite the advances in medical science, we still do not know very much about health indicators of fetal development or any warning signs of delayed or abnormal progress in the womb.

It is hoped that further research will test whether the development of facial expressions is delayed if fetuses experience unhealthy conditions in the womb, such as effects of smoking or alcohol, or where the fetus is undergoing invasive procedures.