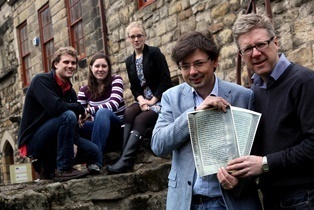 Newly-discovered food recipes from a 12th century Durham Priory manuscript have been found to predate the earliest known ones by 150 years. The recipes are to be recreated at a Durham University event later in the month.

The Latin manuscript mainly consists of recipes for medical ointments and cures and was compiled and written at Durham Cathedral’s priory around the 1160s-1180s . The work was recently re-examined and found to contain the food recipes, which experts believe are amongst the oldest in the western medieval culinary tradition, preceding the previously known examples from circa 1290. The manuscript is now held at Sidney Sussex College, Cambridge University.

“Some of the medical potions in this book seem to have stood the test of time, some emphatically haven’t! But we’re looking forward to finding out whether these newly-discovered recipes have done so and whether they also possess what you might call a certain Je Ne Sais Quoi – or Quidditas, to use the Latin.

“The recipes were noticed recently by Professor Faith Wallis, an expert in medical history and science and an international member of IMEMS. She immediately realised the significance of these recipes, since they so markedly predated the previously earliest-known ones by a century and a half. I encouraged her to translate them and send them to our colleague, food historian Caroline Yeldham who could best work out how to interpret the instructions with a view to recreating them.

“The recipes are for sauces to accompany mutton, chicken, duck, pork and beef. There’s even a seasonal version of the chicken recipe, charmingly called “hen in winter”. We believe this recipe is simply a seasonal variation, using ingredients available in the colder months and specifying “hen” rather than “chicken”, meaning it was an older bird as it would be by that time of year. The sauces typically feature parsley, sage, pepper, garlic, mustard and coriander which I suspect may give them a middle eastern, Lebanese feel when we recreate them. According to the text, one of the recipes comes from the Poitou region of what is now modern central western France. This proves international travellers to Durham brought recipes with them.”

The recipes are now to be used as part of a cookery workshop for history, English and archaeology Master of Arts (MA) students from Durham. They will be attempting to recreate the sauces and dishes for the first time in hundreds of years. This workshop will take place on April 25th at Blackfriars Restaurant in Newcastle, led by Caroline Yeldham and Andy Hook, Blackfriars’ owner.

The same recipes will then be recreated for lunch the following Saturday, April 27th, to accompany a lunchtime lecture in the banqueting hall of the restaurant by Professor Chris Woolgar entitled “Food In Medieval England.” Prof Woolgar has been invited by IMEMS to speak as part of an on-going series of historical lectures on food at Blackfriars.

Andy Hook said: “We’re delighted to be continuing our relationship with Durham University and IMEMS with this latest lecture. It’s an intriguing thought that we’ll be tasting food that hasn’t been experienced for hundreds of years and predate so markedly the earlier recipes we knew about.”

Further coverage of this story can be found here.