New citizenship test is unfit for purpose, according to immigration expert 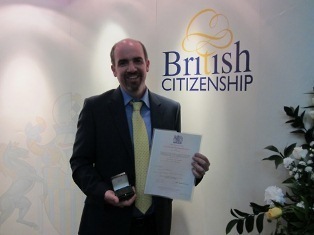 The Government’s latest test takes effect from March 25, 2013. It is based on the third edition of its handbook Life in the United Kingdom: A Guide for New Residents, which was published on January 28, 2013.

Two further books of guidance will be published on March 26. Dr Brooks, who is Reader in Law at Durham Law School, eagerly awaits his copies…

“It also too limited and goes too far to include information about British culture and history at the expense of practical knowledge.”

US-born Dr Brooks himself became a British citizen in September 2011 after undertaking the test in Gateshead, and has been a prominent critic of the process.

He said: “I welcome the inclusion of British culture and history in the test because it is important that prospective citizens demonstrate awareness of Britain’s cultural narrative.

“But the government goes too far in making this narrative the main subject of the test. Britain will not be more cohesive because more have heard about the Battle of Trafalgar, but rather if future citizens understand better how to participate in daily British life and make a contribution.”

“A further problem with the current and future tests is the failure to address the issue of what we expect from new citizens. If the test is meant to be a restrictive barrier, then a greater emphasis on globally well-known historical events and figures in popular culture may make the test easier to pass and so prove counterproductive.

“But if the test is meant to help form a bridge between present and future citizens, then successive governments have failed to consider whether the test contributes to this goal.

The Life in the UK Test, which was introduced in 2005, must be passed in order to qualify for Indefinite Leave to Remain, settlement or citizenship. There are 24 questions and applicants must provide at least 18 correct answers in 45 minutes. Some 150,000 people took the £50 test last year.

Dr Brooks said: “I am disappointed by the failure to consult more widely with recent immigrants. As an American academic with expertise in this area and who has successfully earned Indefinite Leave to Remain and, more recently, British citizenship, the experience of immigrants like me should be invaluable to informing how the ‘Life in the UK’ test might be better revised.

“To date, persons earning citizenship after successfully completing the “Life in the UK” have not been included in any formal feedback to inform how the test can be improved. Instead, it has been drafted largely in isolation from the people for whom it is designed.

“So long as the voices of all stakeholders are not considered, the test will continue to express more the ideology of current governments than meet the needs and demands of the immigrants and the public.”

For further details, see The British Citizenship Test: The Case for Reform, by Thom Brooks (published in The Political Quarterly, August 2012).