Birds may need a hand to weather climate change 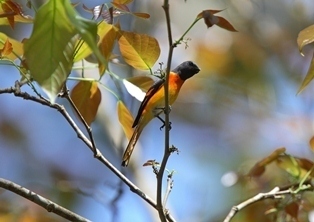 Birds in Asia may need a helping hand to adapt to climate change, according to scientists.

A new study led by Durham University and BirdLife International, shows that many bird species are likely to suffer under future climate change, and will require enhanced protection of important sites, better management of the wider countryside, and in some of the most extreme cases may need to be physically moved to climatically suitable areas to help them survive.

The priority, the researchers say, is for stronger protection and effective management of networks of important sites for conservation which currently support priority species and could offer new habitat for birds forced to shift their distribution in future.

According to the scientists, the findings demonstrate how climate change could affect birdlife and conservation policy across the globe. The researchers say that adapting the way that conservation sites are managed, and facilitating the movement of species to suitable areas, will be critical to future conservation.

Projections show that at least 45% and possibly up to 88% of the 370 species studied will experience declines in suitable climate, leading to changing species composition at individual sites.

The study considered almost 500 scenarios of each bird species’ response to future climate change and showed, for the first time, that despite uncertainty in future climate projections, it was extremely likely that these changes in bird communities would occur. However, the site network as a whole is still likely to retain suitable climate for all species in future, meaning that current conservation efforts should be strengthened, but also adapted.

Co-lead author, Dr Robert Bagchi, a Research Fellow at the ETH Zurich (Swiss Federal Institute of Technology), Zurich, who conducted the analysis while at Durham University, said: “It is striking that despite big differences among these scenarios, they agree on the final outcome. Even under the least extreme scenarios of climate change, most species we examined will have to shift their ranges in order to find suitable areas in the future.”

The regions studied by the research team include the countries of, Bhutan, Laos, Cambodia and Vietnam, as well as parts of Nepal and India.

Co-lead author, Dr Stephen Willis, School of Biological and Biomedical Sciences, said: “As climate changes, we may have to assist birds to move to more suitable locations to help them survive. Although many birds will adjust their distributions, and will find new habitats with suitable climate, we need to manage the countryside to help them disperse, or even relocate birds in the most extreme cases.

“We expect there to be 24 times as many ‘losers’ as ‘winners’ in terms of bird species losing or gaining habitat in the future.”

The researchers explored climate change impacts on birds in the biodiversity hotspots of the Eastern Himalaya and the Lower Mekong. They then forecasted the likelihood of the IBA (Important Bird Area) network to maintain suitable climate for species of conservation concern.

Co-author, Dr Stuart Butchart, Head of Science at BirdLife International, said: “Overall, while these important sites will continue to sustain bird species of conservation concern, climate change will modify which species each site will be suitable for.

“We therefore need to adapt our conservation management. The good news, however, is that protecting natural habitats benefits people too, helping communities to adapt to climate change. Healthy ecosystems enhance resilience to the adverse impacts of climate change and reduce the vulnerability of people.”

The results show that IBAs in the Lower Mekong region were affected more negatively than those in the Eastern Himalaya. Many parts of these regions will experience significant turnover of bird species (the rate of birds newly colonising or becoming locally extinct) over time.

The study draws upon the work of thousands of experts and organisations, in particular the Partners that form BirdLife International, who contributed to defining species of conservation concern (through the IUCN Red List), mapping their distributions, and identifying Important Bird Areas. The work was funded by a MacArthur Foundation grant to BirdLife International and Dr Willis at Durham University.