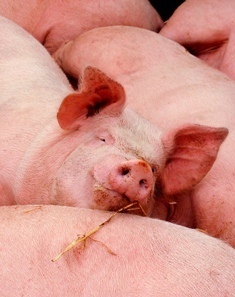 An international team of scientists, including researchers at Durham University, have revealed the genetic code of pigs for the first time, providing new insights into their domestication and the movements of early humans.

Researchers compared the genome or genetic make-up of domestic pigs with those of wild boars – from which domestic pigs are descended.

Their study found significant genetic differences between wild boar from Asia and Europe, which split from a common ancestor around a million years ago.

These differences are also reflected in the genes of current day Western and Chinese breeds of domestic pigs, confirming that pigs were independently domesticated in western Eurasia and East Asia.

The study, published in the journal Nature, was led by scientists at The Roslin Institute at the University of Edinburgh and the Wellcome Trust Sanger Institute, Wageningen University and the University of Illinois. Durham University was involved in the interpretation of the genomic analyses with respect to domestic pigs.

Dr Greger Larson, in the Department of Archaeology, at Durham University, said the new research would provide opportunities to further understand the process and pattern of pig domestication, which could ultimately shed new light on the movements of early humans.

He added: “What the genome allows us to do is to not just ask, but answer questions about the history of pig domestication.

“More specifically we can look at the frequency with which wild boar and domestic pigs interbred across the globe and throughout the history of domestication, including today.

“We can also identify when pigs were domesticated.

“Ultimately this amazing tool will give us greater insight into the movements of early humans, showing where they came from and where they settled throughout history.”

The wider research identified about 21,000 genes in the pig genome and compared these genes to their counterparts in humans, mice, dogs, horses and cows.

The comparison of the pig and human genes revealed several examples where the pig gene resembled the form of a human gene associated with disease, such as diabetes, obesity and Alzheimer’s. These discoveries extend the potential of pigs to shed light on human diseases.

The analysis showed that of all mammals whose genetic make-up has been decoded, pigs have the most genes linked to smell.

Scientists say that this is consistent with the known importance of smell to pigs and could explain the pig’s ability to hunt for truffles.

The study involved more than 40 institutions in 12 countries. It was funded by the United States Department of Agriculture, the European Commission, the Biotechnology and Biological Sciences Research Council, The Wellcome Trust as well as pig industry groups in Europe and the United States.