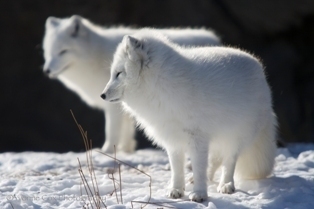 The Little Ice Age allowed a new wave of arctic foxes to colonise Iceland, according to new research.

A “bridge” of sea ice appeared during a dip in temperatures between 200 to 500 years ago allowing arctic foxes to migrate to Iceland from different Arctic regions including Russia, North America and Greenland.

The researchers, led by scientists at Durham University, said their findings showed the importance of sea ice in creating and maintaining the genetic population of the arctic fox across the polar regions where the animal is found.

The multi-disciplinary approach used for this project could also be used to track the migration of other animals found on remote islands, the researchers said.

While Iceland’s approximately 10,000 strong arctic fox population is not at risk, the researchers added that increasing isolation from the rest of the Arctic, caused by warmer temperatures and a lack of sea ice, could further differentiate the island’s population from their mainland relatives.

Ancient arctic foxes also crossed sea ice during previous ice ages to reach Iceland well before human settlement in the 9th Century. Warmer temperatures then melted the sea ice and isolated the ancient foxes on the island before the Little Ice Age reconnected Iceland to the mainland.

The Little Ice Age saw temperatures plummet in the 16th to 19th Centuries across large parts of Europe and North America in particular, and rivers such as the Thames were frequently frozen enough to support ice skating and winter festivals.

The researchers analysed DNA samples from ancient remains of Icelandic arctic foxes dating from two late 9th to 12th Century archaeological sites and compared the findings to DNA data from their modern successors.

They found that the ancient foxes shared a single genetic signature, while the modern population possesses five unique signatures.

The researchers were able to rule out different explanations for the increase in the amount of variation of the ancient foxes, including geographic reasons and breeding between farmed and wild arctic foxes.

The team concluded that the most likely explanation for the boom in genetic diversity among arctic foxes was migration across sea ice that formed during the Little Ice Age.

The research, partly funded by the Natural Environment Research Council (NERC), is published in Proceedings of the Royal Society B - Biological Sciences.

Senior author Dr Greger Larson, in Durham University’s Department of Archaeology, said: “During the Little Ice Age there was a great deal more sea ice in the North Atlantic than there is today and during the late 18th and 19th centuries sea ice routinely grounded on Iceland.

“Even today arctic foxes routinely travel hundreds of miles across sea ice and once the ice bridge was in place, they easily crossed the North Atlantic and were able to arrive on Iceland, increasing the genetic diversity of the population.

“To paraphrase Dr Ian Malcolm in Jurassic Park, ‘Life will always find a way’, and in this case, once the Little Ice Age began, arctic foxes didn’t need much of an opportunity to colonise Iceland.”

Dr Larson added that potential for animal migration had decreased significantly during the 20th Century, a trend which global warming had accelerated.

He said: “Without the sea ice, there will be no new fox migrants and thus the Icelandic population will continue to diverge from their mainland relatives.”

Dr Larson added that the model the research used to determine the genetic diversity of the arctic fox could also be used to track the historical migration of other animals such as reindeer that are also found on Iceland.