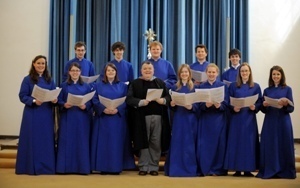 The rousing song Jerusalem and other musical classics have been recorded for the first time as they were originally conceived nearly 100 years ago, following work by a Durham University expert.

While researching music for a new CD of the works of composer, Charles Hubert Parry, Professor Jeremy Dibble, a musicologist in Durham University’s Department of Music, found that the first verse of Jerusalem was written for a solo voice, as opposed to the grand choral start typical of performances at The Last Night of the Proms. The second verse was then intended to be sung by “all available voices” according to Parry’s original published vocal score.

Composed by (Charles) Hubert (Hastings) Parry and based on a poem by William Blake, the song, originally written for the ‘Fight for Right’ movement in 1916, became a rallying call for the women's suffrage (right to vote) movement. It has become a standard of big sporting events, is the anthem of the Women’s Institute, and has been used in many famous films.

The song has been recorded for the first time in its original form by the BBC National Orchestra and Chorus of Wales using Parry’s original orchestration rather than the more familiar Edward Elgar version. This and other Parry classics, including music to celebrate the Queen’s Jubilee, will feature on a new CD to be released in October 2012, by Chandos Records.

Jerusalem, was composed by Parry in March 1916 as a unison song, an increasingly popular vocal form whose melody everybody could sing. He provided orchestral accompaniment for it in 1918. After its first performance at Queen’s Hall on 28 March 1916, the song became popular and was widely sung.

Professor Dibble said: “Parry wrote the first verse of Jerusalem for a lone voice, probably a soprano, to be followed by everyone singing together on the second verse to reflect his desire to create a song of strength, hope and unity.

“People clearly enjoyed singing it together in church, at meetings and at The Last Night of the Proms, so much so that we’ve forgotten Parry’s original intention of a solo beginning.”

The CD will also include the first modern recording of a forgotten national song by Parry, entitled England, using the words from John of Gaunt’s monologue from Shakespeare’s Richard II.

During research into Parry’s work for the new CD, Professor Dibble found that the performing materials for England, the Coronation Te Deum and the Magnificat were no longer in existence; these may have been lost or destroyed. It was therefore necessary for him to track down original manuscripts from The Royal College of Music and The British Library and other printedsources. Using these, he was able to reconstruct Parry’s music as it was originally intended to be performed.

The song England was composed in 1918 in the last year of Parry’s life.

Professor Dibble said: “England is a big, patriotic, unison songright up there with Jerusalem. It is all about a collective national pride, chivalry and idealism, like Jerusalem.”

“Few people seem to know the song now. It may have been the disappearance of the piano from assemblies in schools, a decline in collective singing, coupled with changing times in the post-colonial world that led to its decline.”

“England, the song, is more than just ‘flying the flag’. Parry was interested in and motivated by British values and democracy. Like Jerusalem, its rousing tune expresses a sense of vision, self-sacrifice and hope, typical of Parry's own outlook.”

Other Parry classics on the disc include new recordings to mark the Queen’s Diamond Jubilee. These include the bridal march from The Birds, composed in 1883, and later played at the wedding of Queen Elizabeth in 1947, the Coronation Te Deum for George V in 1911, and Parry’s Magnificat originally dedicated to Queen Victoria on her Diamond Jubilee in 1897.

The new recordings will be released by Chandos Records in October 2012.