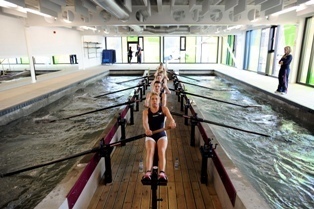 The Minister for Sport and the Olympics, Hugh Robertson MP, opened a new £6.7m world-class sports facility at Durham University, cementing the University's global reputation as a centre for sporting excellence.

The facility at Maiden Castle, supported by a £500k grant from Sport England's Iconic Facilities fund, has been built as part of the London 2012 sporting legacy for the University and the North of England.

It will provide students, staff and the general public, including schools and community groups, with the opportunity to participate in a wide variety of sports at all levels of ability, including elite training and performance.  It will also play host to the Sri Lankan Olympic badminton team for training and acclimatisation prior to the London Olympics.

Central to the new development, which expands and enhances the existing sports facilities at Durham University's Graham Sports Centre at Maiden Castle, is a new high performance training centre for rowing.

This includes a new £1m powered indoor rowing tank, one of only three in the UK and the first in the North of England, and a new purpose-built boat house, with coaching led by former Great Britain Olympic rower, Wade Hall-Craggs.

The tank, used to teach the art of sculling and crew skills, is designed to simulate the movement and feel of a boat through water.  The speed flow of the water can be adjusted electronically to give any speeds up to three metres per second.

Durham University students and graduates are among Olympic hopefuls to make the rowing and fencing teams. Its women are currently ranked first in the British University and College Sport (BUCS) championship and its men are ranked second.

The Vice-Chancellor of Durham University, Professor Chris Higgins, said:  "This is another monumental year for sporting achievement at Durham University and we are immensely proud to be able to contribute to the sporting legacy of the Olympics 2012 through the opening of these new facilities."

Durham University's recent investment in sports facilities on its two campuses totals more than £13m.  A new £5.5m sports centre was opened in 2010 at the University's Queen's Campus in Stockton, with badminton, basketball, volleyball and netball courts, a dance studio and rowing room.

Hugh Robertson said: "Durham University has a strong sporting tradition and this new state-of-the-art centre will help confirm this in the years ahead. This fantastic facility will provide world-class sports facilities for elite athletes and community users alike and help more people to take up sport."

Some 92 per cent of Durham University's students participate in sport at all levels, believed to be the highest such participation rate at a UK University.  Team Durham, as the University's sports operation is known, runs an acclaimed community outreach programme totalling 40 projects - the largest of its kind in the UK.

Professor Higgins added:  "Not only are we able to provide world-class facilities to help our elite athletes to train and perform at their best, we are also able to support sporting achievement at all levels within the University and the community, across a wide range of sports. This provides an excellent platform for personal development and greatly enhances our student experience."

Iconic Facilities is part of the £135 million Places People Play legacy programme that is bringing the magic of a home Olympic and Paralympic Games into communities across the country. Every sports facility that receives funding will carry the London 2012 Inspire mark - celebrating the link to the Games.

Sport England's Property Director, Charles Johnston, said:  "With a rich heritage of participation both within the University and the wider community, it's fantastic to see Durham University build on this with the Graham Sports Centre.  With funding from the Iconic Facilities fund, this state-of-the-art facility is helping us bring the inspiration and magic of a home Olympics into communities in the North and deliver a lasting legacy beyond London 2012."