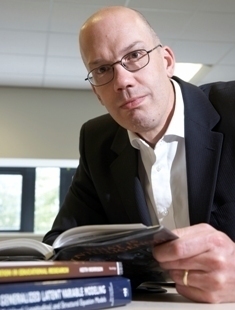 A Durham University expert has revealed that there has been no change in the rate of ‘slippage' in A-Level results and that grade inflation has continued for more than 20 years.

Professor Robert Coe, Director of the Centre for Evaluation and Monitoring (CEM), presented his latest analysis, which includes results from 2010 and 2011 for the first time, at an event (Thursday 13 October) hosted by the Office of Qualifications and Examinations Regulation (Ofqual), in London. The analysis looked at exam grades, content, standards and assessment.

The Ofqual event aims to identify issues surrounding standards and regulation. Speaking at the event, The Secretary of State for Education, Michael Gove, suggested that the number of pupils being given the top A* grade at A-Level could be limited in future.

Professor Rob Coe said: "Data from Durham University's monitoring systems for schools suggest that the rises in the grades achieved by candidates of similar ability are continuing, at both A-level and GCSE.

"We have seen candidates with the same level of ability awarded A-levels about a tenth of a grade higher every year since 1988. This inflation seems to have continued up to the latest round of results, taken in 2011.

"There are various technical solutions that Ofqual should consider, but grade inflation is not a simple problem to solve. One of the problems is that you need a fixed test against which to measure any change.*

"Some people have suggested that having a single awarding body would be an obvious response. I don't agree. For one thing it does not actually solve the problem. You would still need a way of maintaining the standard and of ensuring comparability across qualifications, even with just one organisation. But we also need diversity in the range of courses and qualifications, for good educational reasons.

Previous research by Durham University (in 2008) found significant differences in the relative difficulty of exams in different subjects with the sciences among the hardest. On average, subjects like Physics, Chemistry and Biology at A-level were found to be a whole grade harder than Drama, Sociology or Media Studies, and three-quarters of a grade harder than English, RE or Business Studies.

Note:
*CEM at Durham University provides a test for students as part of CEM's ALIS monitoring system; it is a large-scale fixed test providing data that is an important part of the evidence on standards over time.