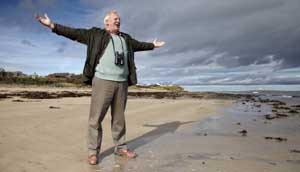 Celebrated opera star Sir Thomas Allen, who has performed on some of the world's great stages, has been appointed to a new leading role as Chancellor of Durham University.

Sir Thomas, 67, will officially become the University's 12th Chancellor when he takes over from award-winning author Bill Bryson in January.

He follows a distinguished line of artists and performers who have held the role of Durham Chancellor including Bryson, Sir Peter Ustinov and Dame Margot Fonteyn.

His appointment was approved at a meeting of Durham's Convocation - an assembly of members of the University - in London tonight (Tuesday, October 11).

Sir Thomas was born in Seaham Harbour, in County Durham. His route to musical stardom began in the 1960s when, as a pupil at Robert Richardson Grammar School, in Ryhope, his talent was recognised and encouraged by physics teacher Dennis Weatherley.

The school's headmaster arranged for the then 18-year-old Sir Thomas to visit Professor Arthur Hutchings in Durham University's Music Department who arranged an interview for him at the Royal College of Music.

Sir Thomas's career began with the Welsh National Opera and on his debut he was described as "surely the best British lyric baritone singing in opera since the war".

He has won worldwide acclaim for the many roles he has made his own including Billy Budd, Pelléas, Eugene Onegin, Ulisse and Beckmesser and for his interpretations of the great Mozart roles, Count Almaviva, Don Alfonso, Papageno, Guglielmo and his signature role, Don Giovanni.

Sir Thomas has sung no less than 50 roles at the Royal Opera House, Covent Garden, and in recent years, he has added directing to his credits, making an acclaimed US debut with The Marriage of Figaro.

According to the playwright Lee Hall, Sir Thomas's remarkable story was the inspiration for his hit film Billy Elliott, about a boy who came from the mining communities of County Durham to dance Swan Lake.

Sir Thomas said: "As a County Durham boy I am extremely proud and honoured to be appointed as Chancellor of Durham University.

"No matter where my life and career have taken me, Durham has always held a special place in my heart so it is a particular privilege for me to accept this prestigious role.

"I am thrilled to be 'coming home' and I greatly look forward to meeting the students, staff and alumni at Durham and representing this magnificent University across the world."

Sir Thomas is currently directing The Barber of Seville for Scottish Opera. He will officially become Chancellor in January, which will also coincide with the 40th anniversary of his association with the Royal Opera House.

Among his many honours, Sir Thomas received an Honorary Doctorate of Music from Durham University in 1988. He is an Honorary Member of the Royal Academy of Music and holds a Fellowship of the Royal College of Music. He is also President of British Youth Opera.

He has maintained strong Durham connections and is the Vice-President of the Durham University Choral Society (DUCS) and an Honorary Patron of the Durham Cathedral Choir Association. In 2007 Sir Thomas performed a recital at Durham's Gala Theatre as part of an event to mark the University's 175th Anniversary.

He also spearheads the charitable Samling Foundation, which inspires young people to excel in the world of music and has worked with children from the North East and across the UK.

The Chancellor is the ceremonial head of the University and performs a range of duties including the awarding of degrees at graduation and an ambassadorial role promoting the University at home and abroad.

"Sir Thomas follows in the tradition of great artists and performers who have held this prestigious role, including Dame Margot Fonteyn, Sir Peter Ustinov and Bill Bryson.

"He perfectly illustrates that with talent, drive and ambition you can achieve your goals and I am sure he will prove an inspiration to all Durham students and a marvellous ambassador for the University."

Sir Thomas's appointment was welcomed by outgoing Chancellor Bill Bryson. He said: "Excellent news about Sir Thomas Allen. I am delighted. I'm sure he will fill the role brilliantly."

Sir Thomas's appointment as Chancellor follows initial consultation with Durham's students, staff and alumni, and a thorough selection process led by a representative working group which considered candidates against a range of criteria to fulfil what has become an increasingly visible ambassadorial and ceremonial role for the University around the world.