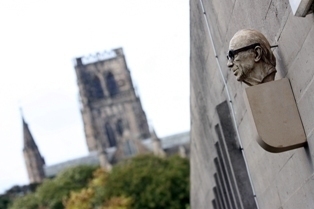 A bust of engineer Sir Ove Arup has been unveiled at the site of his favourite work in Durham City.

Sir Ove considered the Grade I listed Kingsgate Bridge, which connects New Elvet with the Peninsula in Durham, to be his finest achievement despite also overseeing world famous projects such as the Sydney Opera House, The Barbican Centre and London Zoo's penguin pool.

An original bronze bust of Sir Ove, who was also involved in the construction of Durham University's award-winning Dunelm House, was stolen in 2006.

Now Durham University and the The City of Durham Trust have paid for a new sculpture which will stand at the entrance to Kingsgate Bridge, next to Dunelm House.

The new bust is cast in resin and is based on the original 1987 sculpture by Diana Brandenburger.

Professor Chris Higgins, Vice-Chancellor of Durham University, and Douglas Pocock, Honorary Secretary of The City of Durham Trust were joined by family, friends and former business colleagues of Sir Ove in unveiling the bust.

Professor Chris Higgins said: "Sir Ove Arup is responsible for helping to create some of the world's most distinctive and memorable buildings so it is highly significant that he held the design of the Kingsgate Bridge as an example of his finest work.

"Kingsgate Bridge and Dunelm House are two of the finest examples of 20th Century architecture in the City and it is fitting that Sir Ove's creativity should be honoured with this new bust."

Douglas Pocock said: "The City's distinguished modernist architecture here is to be enriched by the presence of a portrait head of Sir Ove Arup.

"Happily, therefore, as we look up to pay homage to a great man, he appropriately again looks down from Dunelm House to his favourite Kingsgate Bridge."

ARUP Director, Jim Burridge, said:"Sir Ove Arup espoused engineering excellence and this remains a key component of our work today, here in the UK and across the globe.

"It is fitting that we not only remember but celebrate his influence, innovative approach and his outstanding contribution to design as we continue to espouse those same values around the world.

"We are proud to welcome the new bust of Sir Ove Arup in recognition of his contribution and lasting legacy beside Durham's Kingsgate Bridge, a fantastic example of innovation, design and construction."

He was the founder of one of the world's largest civil engineering consulting practices, Ove Arup & Partners, and is responsible for helping to create some of the world's most distinctive and memorable buildings.

Kingsgate Bridge was completed in 1963 and Dunelm House, which was designed in partnership with Architects Co-Partnership (ACP), was finished two years later in 1965. Dunelm House is home to Durham Students' Union.

Sir Ove Arup is most closely associated with the concept of "total architecture" - a practice which involved both engineering and architecture within the design of a structure. It was Arup's opinion that Kingsgate Bridge was his finest example of this philosophy.

* A public exhibition looking at the history of Kingsgate Bridge and Dunelm House will be held in the Riverside Café, Dunelm House, from early October until December.

The exhibition will look at the original concept of Total Architecture, through to each structure's modern-day use.

A highlight of the exhibition will be a number of 1960s photographs showing the construction sequence of Kingsgate Bridge, that are currently housed in the University's Palace Green Library.