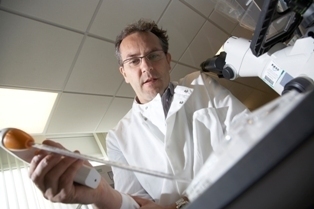 An innovative Durham University spin-out company is celebrating another success.

Reinnervate, a biotechnology company founded by Professor Stefan Przyborski of Durham University's School of Biological and Biomedical Sciences, has won a major international research and development award at the prestigious Annual R&D 100 Awards.

The company's breakthrough 3D cell structure technology, alvetex®, was chosen by an independent judging panel and the editors of R&D Magazine to be among the hundred most technologically significant products introduced into the marketplace over the past year.

The award was presented to reinnervate at a special Gala Awards Banquet on October 13, at the Renaissance Orlando Hotel, SeaWorld, Florida, USA.

Reinnervate has also announced that it has signed agreements with seven new European distributors for the non-exclusive distribution of alvetex.

These agreements mark a significant expansion of reinnervate's distribution network. Under the terms of the new agreements, alvetex will be distributed and sold under the reinnervate brand by regional distributors of life sciences research products-Generon (UK), Biozol GmbH (Germany), Chemie Brunschwig AG (Switzerland), THP Medical Products (Austria), In Vitro AS (Denmark), Euroclone (Italy), and Bio Connect (the Benelux region).

Professor Przyborski's company assists in the funding of eight research PhDs in the School of Biological and Biomedical Sciences and the Department of Chemistry, with a view to benefiting from the technology that the students help to develop. In collaboration, reinnervate then further builds on the research, developing products here in the UK so that they are ready for the international bio-tech market.

Alvetex is a unique and proprietary cell structure scaffold that, for the first time, enables genuine 3D cell growth to be performed routinely and cost effectively in cell biology laboratories.

Professor Stefan Przyborski, reinnervate's Chief Scientific Officer and founder, said: "We were delighted to hear that reinnervate has received this prominent accolade for its accomplishment in developing a solution for routine three dimensional cell culture.

"Technology has now advanced to the stage where scientists can move away from basic two dimensional models simulating cell growth in the laboratory. Alvetex creates more valuable three dimensional systems providing information that is more relevant as to how cells function in real tissues. We envisage that alvetex technology will be used in conventional cell culture laboratories around the world."

Since 1963, the R&D 100 Awards have identified revolutionary technologies newly introduced to the market, many of which have become household names. Winners are picked from industry sectors as diverse as telecommunications, high-energy physics, software, manufacturing, and biotechnology and represent a cross-section of industry, academia, private research firms and government labs.

Reinnervate was founded in 2002 based on the pioneering research of Professor Stefan Przyborski and his colleagues at Durham University, UK, and is funded by NorthStar Equity Investors (NSEI), management and private investors.

Alvetex was also named as one of the top ten life science innovations of 2010 by The Scientist magazine.