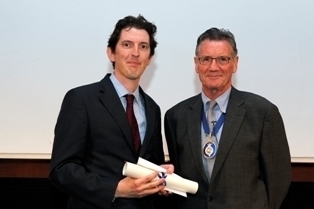 Professor Elden, 39, was presented with the award at a ceremony at the Society's headquarters in Kensington Gore, London and was given the honour of responding on behalf of all the other award winners in recognition of the seniority of his accolade.

Michael Palin said: "Stuart is one of the world leading scholars working at the intersection of political theory and political geography.

"His 2009 book 'Terror and territory: the spatial extent of sovereignty', for which he is recognised here contests the idea that in the era of globalisation, territory no longer matters.

"Terror and territory takes political geography in directions the field has rarely gone before. It is of tremendous intellectual significance, highly deserving of recognition by the Murchison Award."

Professor Elden, a lecturer in the Department of Geography, Durham University, said: "I was initially trained in history, politics and political theory, and one of the things I love most about geography is that a geographical angle can be brought to bear on almost everything.

"My work in 'Terror and territory' focused on the issues of political geography from a theoretical and historical perspective in countries such as Iraq, Afghanistan, Kosovo, Yemen and Pakistan and addressed contemporary global issues.

"One of the most gratifying aspects of the awards is the recognition of teaching. Coming from a family of teachers, where both my mother and father were teachers and then head-teachers, it is wonderful to see this crucial role recognised."