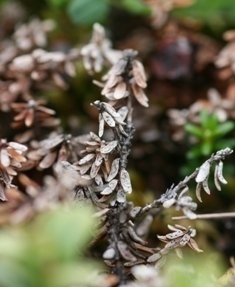 Heavy and prolonged snowfall can bring about unexpected conditions that encourage fungal growth, leading to the death of plants in the Arctic, according to experts.

A new international study confirms that whilst snow has an insulating effect which helps plants to grow bigger, heavy and prolonged snow can, in certain circumstances, also encourage the rapid and extensive growth of killer fungal strains.

The research results, published in the journal Nature Climate Change, show for the first time the potential long term effects of unexpected fungal development on an arctic landscape. Extensive damage to a pervasive species under snowier conditions would leave gaps for another plant to take its place over time but could also alter the food-web for insects, voles, lemmings and their predators.

Co-author of the report, Dr. Robert Baxter, School of Biological and Biomedical Sciences, Durham University, said: "We were surprised to find that this extremely hardy tundra vegetation was killed off by fungal attack.

"In the first few years, as expected, the insulating effect of the snow helped the vegetation to grow, but after six years a tipping point was reached where the fungus spread with great speed and destroyed the plants.

"We need to look more carefully in the future at longer term vegetation and fungus life cycles to see if this is something that could recur and be more destructive over time."

Researchers used snow fences to maintain increased snow conditions, and found that the fungus, Arwidssonia empetri, increased under heavier and prolonged snow cover killing the majority of the shoots of one of the dominant plant species in that area - the dwarf shrub Empetrum hermaphroditum. The team's unexpected finding followed a decision to keep the experiment running longer than was originally planned.

The researchers believe that the findings highlight unforeseen elements that should be factored into future modelling of the impacts of climate change and its effects on vegetation and food-web chains.

Co-author of the report, Johan Olofsson, Department of Ecology and Environmental Science, Umeå University, Sweden, said: "We set out to look at the effects of climate change and the potential of heavier precipitation and snowfall on plants and the processes that influence growth, decomposition and soil nutrients.

"Shrubs are an important part of the arctic vegetation and we did not expect to find a deadly species-to-species effect influenced by this manipulated snow accumulation."

Snow usually protects arctic plants through the long winter period as it maintains a warmer local environment around the overwintering plants and helps them to grow bigger and faster.

During the seven year experiment, the researchers observed steady plant growth under the protection of the snow's insulating blanket. In year six, the fungus spread rapidly, killing the plant and changing the vegetation from a natural carbon sink to a net carbon source.

Co-author of the report, Lars Ericson, Department of Ecology and Environmental Science, Umeå University, Sweden, said: "We discovered some surprising interactions between plants and other organisms in an area that is very important for the world's climate. The results will enable us to have a better understanding of longer term climate change effects and extreme weather events, locally and regionally."

The Abisko Scientific Research Station provided accommodation, laboratory facilities and funding during the periods of field work. The research team is continuing the study to investigate the extent and duration of vegetation change under altered snow conditions.