Europeans were the real cannibals, according to new book 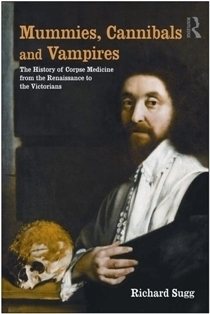 European royalty and eminent scholars swallowed parts of the human body as medicine, including its flesh, blood and bones, right up until the end of the 18th century, a new book on medicinal cannibalism reveals.

For well over two hundred years, even as they denounced the barbaric cannibals of the New World, educated Europeans applied, drank, or wore powdered Egyptian mummy, human fat, flesh, bone, blood, brains and skin, according to the author of the book, who argues that the Europeans were in fact the real cannibals.

Author Dr Richard Sugg, a lecturer in the English Department at Durham University, said: "One thing we are rarely taught at school is this, yet is evidenced in literary and historic texts of the time: James I refused corpse medicine; Charles II made his own corpse medicine; and Charles I was made into corpse medicine.

"The human body has been widely used as a therapeutic agent with the most popular treatments involving flesh, bone or blood. Cannibalism was found not only in the New World, as often believed, but also in Europe."

The book, called 'Mummies, Cannibals and Vampires', will be published on 29 June by Routledge and charts the largely forgotten history of European corpse medicine from the Renaissance to the Victorians.

The history of medicinal cannibalism, Dr Sugg argues, raises a number of important social questions: not least about the intrinsic 'savagery' of the cannibal, and the medical ethics of the early-modern period.

Dr Sugg said: "Medicinal cannibalism used the formidable weight of European science, publishing, trade networks and educated theory.  Whilst corpse medicine has sometimes been presented as a medieval therapy, it was at its height during the social and scientific revolutions of early-modern Britain. It survived well into the eighteenth century, and amongst the poor it lingered stubbornly on into the time of Queen Victoria."

The book gives numerous vivid, often disturbing examples of the practice, ranging from the execution scaffolds of Germany and Scandinavia, through the courts and laboratories of Italy, France and Britain, to the battlefields of Holland and Ireland, and on to the tribal man-eating of the Americas.

Dr Sugg adds: "Quite apart from the question of cannibalism, the sourcing of body parts now looks highly unethical to us. In the heyday of medicinal cannibalism bodies or bones were routinely taken from Egyptian tombs and European graveyards. Not only that, but some way into the eighteenth century one of the biggest imports from Ireland into Britain was human skulls. Whether or not all this was worse than the modern black market in human organs is difficult to say."

Dr Sugg's research will be featured in a forthcoming Channel 4 documentary with Tony Robinson in which they reconstruct versions of older cannibalistic medicines with the help of pigs' brains, blood and skull.