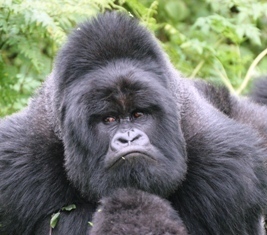 A new study offers hope for species such as the Siberian Tiger that might be considered ‘too rare to save', so long as conservation efforts can target key threats.

The findings have important implications for conserving some of the world's most charismatic endangered species, which often exist in populations far smaller than the many thousands of individuals that earlier studies had argued were necessary for viability.

Charismatic examples include the mountain gorilla, which likely now number 1,000 or less, the approximately 450 remaining Amur or Siberian tigers, the 180-500 remaining mature Philippine eagles, and the 70 wild Puerto Rican parrots.

The findings of a UK-US research team, the largest critical review of the use of minimum viable population (MVP) (*1) numbers in conservation, dispute the use of a universal MVP as a yardstick for conservation policies. According to the researchers there is no single population size that can be used as a catch-all guideline to save endangered species.

Co-author of the report, Dr. Philip Stephens, School of Biological and Biomedical Sciences, Durham University, said: "Populations usually show rapid declines as a result of human activities such as hunting and habitat conversion. The results of the study are encouraging and show that if we can remove the negative effects of human activities, even relatively small populations could be viable in the long term."

Dr. Greg Hayward, the U.S. Forest Service's (USFS) regional ecologist for Alaska said: "This is good news for biologists working to save species like the tiger. There's a lot of work to do to arrest the effects of poaching, prey loss and habitat destruction. However, if that work is successful, the tiger might yet be able to recover, despite the relatively small size of most tiger populations."

The study, published in the Journal, Trends in Ecology and Evolution, shows that population sizes required for long-term viability vary, both within and among species, and depend on the specific circumstances in which the population is found. Estimates of viable population sizes were typically reduced to hundreds rather than thousands of individuals for populations that were relatively stable.

Researchers on the US-UK team argue that conservationists should not give up on saving an endangered species if its population is below an MVP figure, and they advise policy-makers to be cautious about setting guidelines for ‘safe' population sizes.

The researchers also warn against potential complacency and stress the need to look in detail at the specific threats that a species faces. They argue that no population size is likely to be safe from extinction when conservation activities fail to reduce the impact of the factors causing the population to decline.

Dr. Curt Flather, a research ecologist with the USFS Rocky Mountain Research Station in Colorado said: "The enormous variability in estimates shows that many populations also need to be highly abundant to be viable. The extinction of the passenger pigeon, which numbered 3 to 5 billion individuals in North America during the 1800s, is a reminder that population size alone is no guarantee against extinction."

Steve Beissinger, a Professor at the University of California, Berkeley, emphasised the need to go beyond established guidelines in determining whether a species is endangered. "Viability depends on the idiosyncrasies of the factors causing a species to decline, and there is no single population size that guarantees safety for all species. There's more that matters than just size."