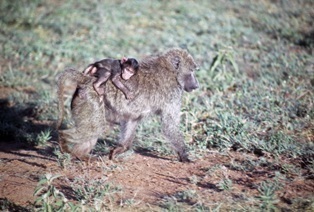 The nine-month pregnancy in humans is influenced by the structure of the placenta, according to new research into the evolution of reproduction in mammals which ends a 100-year mystery.

The nine-month pregnancy in humans is influenced by the structure of the placenta, according to new research into the evolution of reproduction in mammals which ends a 100-year mystery.

The study, by Durham University and the University of Reading, shows that babies grow twice as fast in the wombs of some mammals compared to others.  The difference in growth rates appears to be due to the structure of the placenta and the way it connects mother and baby.

The research has found that the more intimate the connection is between the tissues of the mother and the foetus, the faster the growth of the baby and the shorter the pregnancy.  The findings help to explain why humans, whose placentas do not form the complex web-like structure seen in animals such as dogs and leopards, have relatively lengthy pregnancies.

The structure of the placenta is surprisingly different amongst mammal species although it serves the same basic function in all of them. The scientists say that, despite speculation, the reasons for this variation have been a mystery for more than 100 years, until now.

The researchers, whose findings are published in the academic journal American Naturalist this week, analysed data on 109 mammal species showing for the first time that the structure of the placenta influences pregnancy duration in mammals.   The scientists say that the placenta in some mammals is highly 'folded' creating a larger surface area, increasing the rate at which nutrients are passed from mother to baby.

This sort of folding is a common way in which evolution has solved the problem of increasing surface area in animal bodies. It is seen in many tissues where a large surface area needs to be packed into a small space, including the lungs, intestines and cortex of the brain.

Females of all mammal species develop placentas when they conceive, including bats, whales, and elephants. The placenta connects the developing foetus to the lining of the womb to allow nutrient uptake, waste elimination, and gas exchange via the mother's blood supply.

The research team studied the length of pregnancy, structure of placenta, and size of offspring in mammals, and examined how these characteristics have changed during the evolution of mammals.  They found that, despite the placenta essentially having the same function in all mammals, there were some striking structural differences.

Previously, the extent to which there is direct contact between the mother's blood and the placenta was thought to reflect an evolutionary arms-race between mother and baby with both battling for 'control' over how much food is given and received.  In this conflict, it is believed that the mother needs to reserve some of her resources for her other offspring but the foetus 'demands' more to fuel its growth.

Lead author, Dr Isabella Capellini, says "This study shows that it is not necessarily the contact with maternal blood which determines speed of growth, but the extent to which the tissues of mother and baby are "interlocked", or folded, with one another.

"In humans, the placenta has simple finger-like branches with a relatively limited connection between the mother's tissues and those of the foetus, whereas in leopards, for example, it forms a complex web of interconnections that create a larger surface area for the exchange of nutrients."

Co-author Professor Robert Barton from Durham University explained: "Parent-offspring conflict is universal. From the moment of conception, the physiologies of mother and baby are adapted to achieve slightly different goals in terms of how fast the baby grows.

"Because we found no differences in the size of the babies when they are born, it seems that the outcome of this conflict is a kind of equilibrium in which faster growth is offset by a shorter pregnancy."

Understanding how differences between species evolve and what combination of pressures and conflicts gives rise to certain physiological features can help us to appreciate issues as diverse as economics, farming and biodiversity.