Durham scientists help measure the most distant galaxy ever discovered 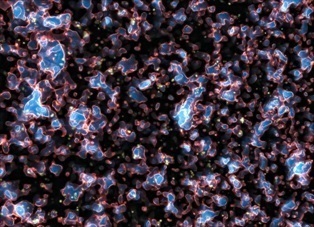 Durham University scientists have helped confirm that a distant galaxy is the most remote object in the Universe ever observed.

The galaxy, first spotted by the Hubble space telescope, was seen as it would have appeared 600 million years after the Big Bang, according to research published in the journal Nature.

This was when the Universe, which is 13.7 billion years old, was only four per cent of its present age, the scientists said.

The research was carried out by a European team of astronomers led for the UK by scientists from the Universities of Durham and Bristol and contributed to by STFC's UK Astronomy Technology Centre.

Using the European Southern Observatory's (ESO's) Very Large Telescope, the team measured the distance to the remote galaxy by carefully analysing the faint glow of the galaxy. These are the first confirmed observations of a galaxy whose light is difficult to see because of a hydrogen fog that filled the Universe at this early time.

"Using the ESO Very Large Telescope we have confirmed that a galaxy spotted earlier using Hubble is the most remote object identified so far in the Universe," said lead author Matt Lehnert of the Observatoire de Paris.

"The power of the VLT and its SINFONI spectrograph allows us to actually measure the distance to this very faint galaxy and we find that we are seeing it when the Universe was less than 600 million years old."

Confirming the distances to such faint and remote objects is a huge challenge that currently can only reliably be done using spectroscopy from very large ground-based telescopes such as the VLT.

The difficulty is that by the time the young galaxies' initially brilliant light reaches Earth they appear very faint and small and the remaining dim light falls mostly in the infrared part of the spectrum because its wavelength has been stretched by the expansion of the Universe - an effect known as redshift.

The hydrogen fog that absorbed the fierce ultraviolet light from young galaxies less than a billion years after the Big Bang, make this process more difficult.

Despite these challenges, 16 hours of observations on a candidate galaxy called UDFy-38135539 and then two months of subsequent analysis and testing led to the team finding they had clearly detected the very faint glow from hydrogen at a redshift of 8.6, which makes this the most distant object ever confirmed by spectroscopy. A redshift of 8.6 corresponds to a galaxy seen just 600 million years after the Big Bang.

"These observations are clearly at the cutting-edge of what is possible with current instrumentation. They demonstrate what will be more routinely achievable with the new generation of instruments coming on-line, particularly the UK-led KMOS spectrograph that is about to be installed on the VLT," said co-author Professor Simon Morris in the Department of Physics at Durham University.

"One of the surprising things about this discovery is that the glow from the observed galaxy seems not to be strong enough on its own to clear out the hydrogen fog. There must be other galaxies, probably fainter and less massive nearby companions," explains co-author Dr Mark Swinbank also of the Department of Physics at Durham University.

"In the longer term, larger telescopes such as ESO's planned 42m E-ELT will be able to study in detail galaxies at these great distances using technology pioneered in the UK in proposed instruments such as EAGLE and HARMONI," added co-author Malcolm Bremer of the University of Bristol.